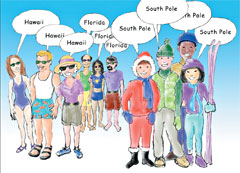 The outcome of elections that offer more than two alternatives but with no preference by a majority, is determined more by the voting procedure used than by the votes themselves. Mathematicians have shown that in such elections, illogical results are more likely than not. For example, the majority of this group want to go to a warm place, but the South Pole is the group’s plurality winner. So if these people choose their group’s vacation destination in the same way most elections are conducted, they will all go to the South Pole and six people will be disappointed, if not frostbitten.

Elections in which only the top preference of each voter is counted are equivalent to a school choosing its best student based only on the number of A’s earned.The inequity of such a situation has led to the development of other voting methods. In one method, points are assigned to choices, just as they are to grades. Using this procedure, these people will vacation in a warm place—a more desirable conclusion for the group. Mathematicians study voting methods in hopes of finding equitable procedures, so that no one is unfairly left out in the cold.