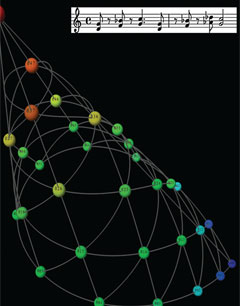 Mathematics and music have long been closely associated. Now a recent mathematical breakthrough uses topology (a generalization of geometry) to represent musical chords as points in a space called an orbifold, which twists and folds back on itself—much like a Möbius strip does. This representation makes sense musically in that sounds that are far apart in one sense yet similar in another, such as two notes that are an octave apart, are identified in the space.

This latest insight provides a way to analyze any type of music. In the case of Western music, pleasing chords lie near the center of the orbifolds and pleasing melodies are paths that link nearby chords. Yet despite the new connection between music and coordinate geometry, music is still more than a connect-the-dots exercise, just as mathematics is more than addition and multiplication.