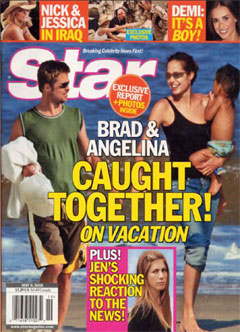 Actually, they weren’t caught together at all—their images were put together with software. The shadows cast by the stars’ faces give it away: The sun is coming from two different directions on the same beach! More elaborate digital doctoring is detected with mathematics. Calculus, linear algebra, and statistics are especially useful in determining when a portion of one image has been copied to another or when part of an image has been replaced.

Tampering with an image leaves statistical traces in the file. For example, if a person is removed from an image and replaced with part of the background, then two different parts of the resulting file will be identical. The difficulty with exposing this type of alteration is that both the location of the replacement and its size are unknown beforehand. One successful algorithm finds these repetitions by first sorting small regions according to their digital color similarity, and then moving to larger regions that contain similar small ones. The algorithm’s designer, a leading digital forensics expert, admits that image alterers generally stay a step ahead of detectors, but observes that forensic advances have made it much harder for them to escape notice. He adds that to catch fakers, “At the end of the day you need math.”1