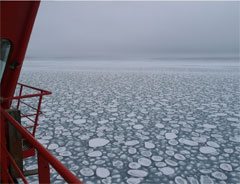 Sea ice is one of the least understood components of our climate. Naturally its abundance or scarcity is a telling sign of climate change, but sea ice is also an important actor in change as well, insulating the ocean and reflecting sunlight. A branch of mathematics called percolation theory helps explain how salt water travels through sea ice, a process that is crucial both to the amount of sea ice present and to the microscopic communities that sustain polar ecosystems. By taking samples, doing on-site experiments, and then incorporating the data into models of porous materials, mathematicians are working to understand sea ice and help refine climate predictions.

Using probability, numerical analysis, and partial differential equations, researchers have recently shown that the permeability of sea ice is similar to that of some sedimentary rocks in the earth’s crust, even though the substances are otherwise dissimilar. One major difference between the two is the drastic changes in permeability of sea ice, from total blockage to clear passage, that occur over a range of just a few degrees. This difference can have a major effect on measurements by satellite, which provide information on the extent and thickness of sea ice. Results about sea ice will not only make satellite measurements more reliable, but they can also be applied to descriptions of lung and bone porosity, and to understanding ice on other planets.