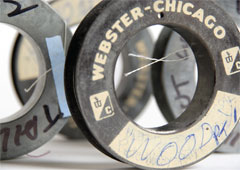 The spools of wire (left) contain the only known live recording of the legendary folk singer Woody Guthrie. A mathematician, Kevin Short, was part of a team that used signal processing techniques associated with chaotic music compression to recapture the live performance, which was often completely unintelligible. The modern techniques employed, instead of resulting in a cold, digital output, actually retained the original concert’s warmth and depth. As a result, Short and the team received a Grammy© Award for their remarkable restoration of the recording.

To begin the restoration the wire had to be manually pulled through a playback device and converted to a digital format. Since the pulling speed wasn’t constant there was distortion in the sound, frequently quite considerable. Algorithms corrected for the speed variations and reconfigured the sound waves to their original shape by using a background noise with a known frequency as a “clock.” This clever correction also relied on sampling the sound selectively, and reconstructing and resampling the music between samples. Mathematics did more than help recreate a performance lost for almost 60 years: These methods are used to digitize treasured tapes of audiophiles everywhere.