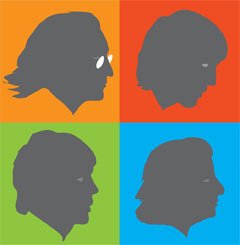 The music of most hit songs is pretty well known, but sometimes there are mysteries. One question that remained unanswered for over forty years is: What instrumentation and notes make up the opening chord of the Beatles’ “A Hard Day’s Night”? Mathematician Jason Brown–a big Beatles fan–recently solved the puzzle using his musical knowledge and discrete Fourier transforms, mathematical transformations that help decompose signals into their basic parts. These transformations simplify applications ranging from signal processing to multiplying large numbers, so that a researcher doesn’t have to be “working like a dog” to get an answer.

Brown is also using mathematics, specifically graph theory, to discover who wrote “In My Life,” which both Lennon and McCartney claimed to have written. In his graphs, chords are represented by points that are connected when one chord immediately follows another. When all songs with known authorship are diagrammed, Brown will see which collection of graphs–McCartney’s or Lennon’s–is a better fit for “In My Life.” Although it may seem a bit counterintuitive to use mathematics to learn more about a revolutionary band, these analytical methods identify and uncover compositional principles inherent in some of the best Beatles’ music. Thus it’s completely natural and rewarding to apply mathematics to the Fab 22.