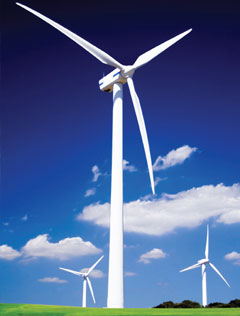 Mathematics contributes in many ways to the process of converting wind power into usable energy. Large-scale weather models are used to find suitable locations for wind farms, while more narrowly focused models--incorporating interactions arising from factors such as wake effects and turbulence--specify how to situate individual turbines within a farm. In addition, computational fluid dynamics describes air flow and drag around turbines. This helps determine the optimal shapes for the blades, both structurally and aerodynamically, to extract as much energy as possible, and keep noise levels and costs down.

Mathematics also helps answer two fundamental questions about wind turbines. First, why three blades? Turbines with fewer blades extract less energy and are noisier (because the blades must turn faster). Those with more than three blades would capture more energy but only about three percent more, which doesn’t justify the increased cost. Second, what percentage of wind energy can a turbine extract? Calculus and laws of conservation provide the justification for Betz Law, which states that no wind turbine can capture more than 60% of the energy in the wind. Modern turbines generally gather 40-50%. So the answer to someone who touts a turbine that can capture 65% of wind energy is “All Betz are off.”