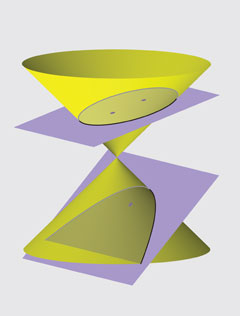 Some of the simplest and most well-known curves--parabolas and ellipses, which can be traced back to ancient Greece--are also among the most useful. Parabolas have a reflective property that is employed in many of today’s solar power technologies. Mirrors with a parabolic shape reflect all entering light to a single point called the focus, where the solar power is converted into usable energy. Ellipses, which have two foci, have a similar reflecting property that is exploited in a medical procedure called lithotripsy. Patients with kidney stones and gallstones are positioned in a tank shaped like half an ellipse so that the stones are at one focus. Acoustic waves sent from the other focus concentrate all their energy on the stones, pulverizing them without surgery. Math can sometimes throw you a curve, but that’s not necessarily a bad thing.

Parabolas and ellipses are curves called conic sections. Another curve in this category is the hyperbola, which may have the most profound application of all--the nature of the universe. In plane geometry, points that are a given distance from a fixed point form a circle. In space, points that are a given spacetime distance from a fixed point form one branch of a hyperbola. This is not an arbitrary mandate but instead a natural conclusion from the equations that result when the principle of relativity is reconciled with our notions of distance and causality. And although a great deal of time has elapsed since the discovery of conic sections, they continue to reap benefits today.