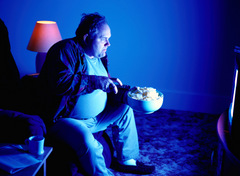 Once a problem only in the developed world, obesity is now a worldwide epidemic. The overwhelming cause of the epidemic is a dramatic increase in the food supply and in food consumption--not a surprise. Yet there are still many mysteries about weight change that can’t be answered either inside the lab, because of the impracticality of keeping people isolated for long periods of time, or outside, because of the unreliability of dietary diaries. Mathematical models based on differential equations can help overcome this roadblock and allow detailed analysis of the relationship between food intake, metabolism, and weight change. The models’ predictions fit existing data and explain such things as why it is hard to keep weight off and why obese people are more susceptible to further weight gain.

Researchers are also investigating why dieters often plateau after a few months and slowly regain weight. A possible explanation is that metabolism slows to match the drop in food consumed, but models representing food intake and energy expenditure as a dynamical system show that such a weight plateau doesn’t take effect until much later. The likely culprit is a combination of slower metabolism and a lack of adherence to the diet. Most people are in approximate steady state, so that long-term changes are necessary to gain or lose weight. The good news is that each (enduring) drop of 10 calories a day translates into one pound of weight loss over three years, with about half the loss occurring in the first year.