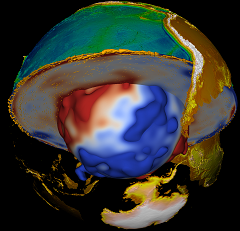 We know more about stars light years away than we do about the mantle that begins just tens of miles beneath our feet. Although friction between tectonic plates is the ultimate factor in determining earthquakes, the driving force for earthquakes and volcanoes is convection in the mantle. The application of these forces to the tectonic plates is governed by continuum mechanics, but the uncertainties in modeling seismic events--which emerge from the variability within the Earth, the complex geometries that are present, and highly complicated material properties--are profound. Nevertheless, despite these unknowns, we now have significant insight into the composition and history of the mantle, and into some aspects of earthquake mechanism.

When the edges of two tectonic plates lock, stress accumulates over a long period of time, and the built-up energy eventually gets released suddenly in the form of an earthquake. That we know, but we may never know enough to forecast earthquakes. The best that can be done is a probabilistic statement of heightened risk in a general area over a certain period of time. People in those areas can then take precautions, such as retrofitting buildings or having emergency supplies handy, that have been shown to be effective in minimizing injuries and property damage. Mathematicians contribute to our understanding in areas ranging from developing models for earthquake events to identifying patterns and the probabilities of this and other natural hazards.