About The Math Game (formerly WWTBAM) 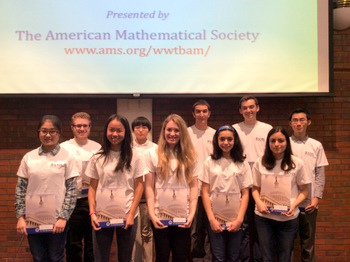 In The Math Game high school students compete for cash and prizes by answering multiple choice mathematics questions. The cash prize in each game is donated by the AMS. Other prize donors are: Art of Problem Solving--our Online Community Sponsor--Wolfram Research, Texas Instruments, and John Wiley & Sons.

The game is a program of the AMS Public Awareness Office and was developed by Mike Breen (AMS Public Awareness Officer) and Bill Butterworth (DePaul University). Both Mike and Bill have math and game shows in their blood. Bill used his math skills, specifically in probability, as a consultant with The Price Is Right (in the Age of Barker) so that individual on-stage games would have the right amount of victories. Mike was a contestant on Jeopardy! and Wheel of Fortune. The only question/answer Mike got wrong in his Jeopardy! appearance was Final Jeopardy (not optimal), but he did win a trip to Hawaii. In his other game show appearance, Mike actually cut his hand on the wheel. No way to put a good spin on that!

Given their history, it was natural for Bill and Mike to create a math game, which they did in 2001 for the Joint Mathematics Meetings in New Orleans. The name was changed in 2020 (from Who Wants to Be a Mathematician--which implied that only winners or those competing could be mathematicians), to make it easier for people to remember and refer to. Other aspects of the game have also changed over the years but The Math Game is still designed to reward good math students, and give them a chance to shine in an entertaining and mathematically challenging format. 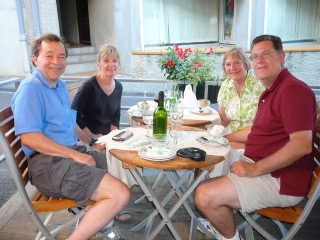 There are two versions of The Math Game. Both involve high school students answering multiple choice math questions for cash and prizes.

Championship: Students from schools in four regions in the U.S., two from nearby the host city for the annual Joint Mathematics Meetings (JMM), one from Canada, and one from the United Kingdom compete for a US\$10,000 first prize at the Joint Mathematics Meeting (JMM) in January. The 12 students qualify by taking two rounds of tests in the fall (Round One usually runs a little over two weeks, starting in the second week of September), most doing so online. Every school in the U.S. and Canada that participates in qualifying receives a gift certificate from Art of Problem Solving. Each student who takes the test and successfully completes three online challenges receives three one-year licenses to Wolfram software from Wolfram Research.

Those who score 7 or above (out of 10) in Round One, qualify for the Round Two test. If fewer than 20% of students score 7 or above, then that minimal score will be adjusted so that at least the top 20% in Round One will be eligible for Round Two. The top scorers in each of the regions (often determined by tie-breakers) and Canada compete in the semifinals at the JMM (six contestants in each semifinal). (The UK representative is chosen from among the top-scoring UK students in Round Two.) The semifinal winners go on to the finals, also at the JMM. Each cash amount won by the contestants is matched by the AMS and awarded to the math department of his or her school (or for homeschooled students, to their homeschool association or a math enrichment organization). So the first-place winner receives US\$5,000 as does his or her math department. The AMS pays for (reasonable) travel, food, and lodging for each contestant and one accompanying adult.

Regional games occur across the country throughout the school year. So far we've traveled from Boston to Honolulu and many places in between: 32 states, the District of Columbia, Puerto Rico, the US Virgin Islands, and Vancouver, British Columbia. There are usually around two or three regional games held at colleges and universities during the school year at which 6-10 contestants compete for a first prize of up to \$3,000. Winners do not qualify for the Championship game, though. Every school that participates in qualifying receives a gift certificate from Art of Problem Solving. The game offers a good way for math departments to have a half-day (or more) of mathematics for area students. Often someone from the department will speak for 30-40 minutes, then a snack break, then the game. Departments who would like to host The Math Game should contact the AMS Public Awareness Office.