Who Wants to Be a Mathematician at the University of Michigan 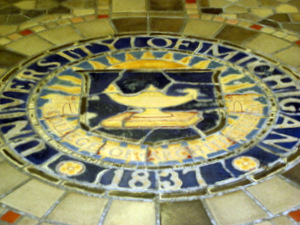 "I'd like to thank you for this great experience that I'll never forget."

"The contest today in Ann Arbor was certainly fun and a great experience for Whit and everyone today from our school."

"We had a great time and it was good for the kids to see math in action from their peers. Thank you for having us."

"Thank you for the exciting competition and great opportunity."

When Zieve was young he thought mathematicians spent their time multiplying big numbers, so his goal in this talk was to give the audience an idea of what mathematicians do, through examples in number theory. He noted the 2009 survey that named mathematician as the best job in the U.S. Zieve agreed with the survey, but not for practical reasons. Instead, he said that mathematics is all about creating and exploring new worlds, and seeing the connections between them. So doing mathematics "is like going to outer space, except you do it in your office."

He then talked about prime numbers and the Fundamental Theorem of Arithmetic, showing Zermelo's 1934 proof. Zieve then asked if unique factorization carries over to other worlds such as the even numbers (it doesn't) or to polynomials with integer coefficients (it does). To counter the impression that there is no new mathematics, he gave a result obtained this year by his PhD student Brian Wyman about unique factorization in the collection of polynomials with integer coefficients in which the operation is composition.

After some nice refreshments provided by the Department of Mathematics, the audience returned to the auditorim and watched eight students (pictured below) play two games of ...

In the Square-Off Round--one question to decide who would get the chance at the Bonus Question--Whit signaled in first, but was wrong. This gave Neil 60 seconds to think about his answer. He used about 58 of those seconds and answered correctly when he signaled in, so he got a chance at the $2000 Bonus Question.

Neil used all his time on the Bonus Question as well, and answered correctly to win the big money. He gave a great explanation of how he arrived at the correct answer.

Here are all the prizes won by the contestants in Who Wants to Be a Mathematician.

The AMS thanks sponsors Texas Instruments, Maplesoft, and John Wiley and Sons for their continued generous support of Who Wants to Be a Mathematician. Thanks also to local organizers Stephen DeBacker and Carrier Berger of the University of Michigan's Department of Mathematics, Norman Richert of Mathematical Reviews® for all the work they did to make the lecture and game a success, and to the students, teachers, parents, and AMS staff from Mathematical Reviews® who attended. This being the first warm Friday of spring, there were many temptations--such as beach volleyball on frat house lawns--that they passed up to attend the lecture and game.

Photographs by Who Wants to Be a Mathematician judge and co-creator Bill Butterworth (DePaul University Department of Mathematical Sciences), and by Norman Richert and Mike Jones (Associate Editors, Mathematical Reviews®). Text by Mike Breen.