Who Wants to be a Mathematician at the University of Michigan

Eleven Michigan high school students  were contestants in Who Wants To Be A Mathematician May 19 on the University of Michigan campus in Ann Arbor. John Hawksley of Grosse Pointe North High School was the big winner that day--winning $2000 from the AMS and many other prizes.

The audience of almost 200 people was made up mostly of students from high schools represented in the competition, but a sizable contingent of AMS employees from Mathematical Reviews® was also present. Students, teachers, Mathematical Reviews staff, and University of Michigan personnel enthusiastically cheered on all the contestants and helped with lifelines when needed. 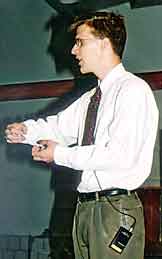 The morning began with a talk by Stephen DeBacker, an Associate Professor in the University of Michigan Department of Mathematics. DeBacker used the game's name as a basis for his talk in which he explained how he became a mathematician. He said that there were two things he wanted students to take away from his talk. One was an inkling of why people become mathematicians. For him, "Mathematics is extremely beautiful ... it's just gorgeous." The second was explained later in his talk.

Debacker told the audience that when he was in high school in Kansas, he had no thoughts at all of becoming a mathematician--he wanted to be a historian. Although he did take part in mathematics competitions while in high school, the only event he competed in was "Calculations with calculators," which only amounted to pushing buttons.

One day his geometry teacher showed the class how to bisect an angle using only a compass and (unmarked) straightedge, and offered extra credit to anyone who could devise a general method, using the same tools, to trisect an angle. Debacker told how he tried for four years and went through reams of paper, but could not find such a method. This "failure" is actually to his credit because later he discovered that it is impossible to construct a 20° angle using only a compass and straightedge. The impossibility of such a construction was the second fact that he wanted his audience to remember from his talk.

In college, while thinking of becoming an historian of science, Debacker took courses from Gerald Alexanderson and Paul Halmos. At this point in the lecture, Debacker observed that "Teachers affect you through your entire life." One day in Halmos's abstract algebra class, Halmos wrote on the board that the statements

A 60°  angle can be trisected using compass and straightedge.

The solutions to the equation x3-3x-1 = 0 can be written using the integers and the operations of addition, subtraction, multiplication, division and extraction of square roots.

are equivalent.It was a revelation to Debacker that two such seemingly unrelated ideas could be related and that was the day he decided to become a mathematician.

Who Wants To Be A Mathematician 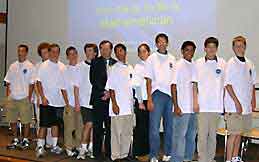 After a short break, during which audience members enjoyed snacks and beverages furnished by the University of Michigan Department of Mathematics, the following eleven students played Who Wants To Be A Mathematician.

John Hawksley was the first contestant. John is a senior, who will attend MIT in the fall. He was very sure of himself throughout the round and answered all but the last question without using any lifelines. Although he used all three lifelines on the last question, he appeared to have made up his mind on his answer before using even one of the lifelines. His answer to the final question was correct, which earned him $2000 and the following prizes: Maple 9.5 from Maplesoft; a $100 gift certificate to Borders from the University of Michigan Department of Mathematics; Anton's Calculus and access to the website Machina from John Wiley and Sons; one-year subscriptions to The College Mathematics Journal andHorizons, two mathematics books, and a T-shirt from the Mathematical Association of America; and What's Happening in the Mathematical Sciences by Barry Cipra, five T-shirts, Mathematical Impressions by Anatolii Fomenko, a water bottle, and a cap from the AMS. 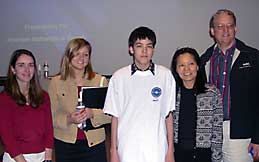 The next contestant was Alex Romine, a junior at Detroit Catholic Central High School. Alex also got to the last question, but had used all his lifelines by the time he got to that level. He answered six tough questions in a row, after using his lifelines, but did not get the last question correct. Alex still collected many prizes and impressed the audience with his mathematical ability.

Since both John and Alex had advanced so far in their rounds, there was not time to play a full round, so the remaining contestants then played simultaneously in a shorter round. Christina Jacovides of Grosse Pointe South (archrivals of Grosse Pointe North) took the hot seat for much of the shorter round. Christina followed John's and Alex's lead by giving clear, thoughtful reasons for her choices which helped the audience understand why her answers were correct.

After Christina left the stage, Max GrazierG'sell and Michael Schoenhals were the only contestants remaining. Both got to the penultimate question, but despite strong rooting sections, neither could advance past that point. Max and Michael did such a good job on stage that in addition to the prizes they won, they each received $100 Borders gift certificates from the University of Michigan Department of Mathematics.

The talk and the game made for an exciting day at the University of Michigan. The audience, many wearing their math club T-shirts or holding up signs encouraging their classmates, thoroughly enjoyed their time at the University. The AMS congratulates all the contestants and thanks their teachers for their participation. The AMS also thanks the University of Michigan Department of Mathematics, particularly Doreen Fussman and Bert Ortiz, for its work hosting the event.