On November 3, about 200 high school students and teachers from the metropolitan New York area were treated to a morning of mathematics at the New York Hall of Science as they first listened to Ken Ribet (University of California Berkeley) give a talk on some of the mathematics behind the proof of Fermat's Last Theorem and then watched area students compete for cash and prizes in Who Wants to Be a Mathematician.

Fermat's Last Theorem and Beyond? by Ken Ribet

Ribet was introduced by Victoria Powers (Emory University) and Glenn Stevens (Boston University), former and current chairs of the Arnold Ross Lecture Series Committee, respectively. Powers told the audience of the different careers that math majors have available to them and listed the choices made by math majors from the Emory class of 2005--law and finance, for example. Stevens gave a brief biography of Ribet, who went to a local high school, Far Rockaway High. He characterized Ribet as "a pretty good guy" whose "work represents the best of what mathematics is all about." Ribet, whose parents were in attendance, then added to the biography, telling of the time he and a friend went to a mathematics competition on a whim and forgot to tell any "adults" where they were going. As a result the two were classified as missing for about six hours. Ribet did get two of the three problems correct, however, so he felt like it was worth it.

During the question-and-answer session, Ribet spoke about his role in the proof of Fermat's Last Theorem--proving a connection between the theorem and elliptic equations. He also showed the connection between the relatively recent proof and work by mathematicians such as Gauss, and said, "When you go back and look at the ancients, very often you get inspiration." 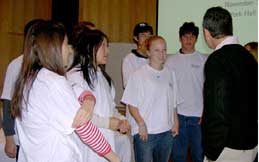 After Ribet's talk, eight students from New York, Connecticut and New Jersey, listed below and pictured with Ribet and game emcee Mike Breen, played two games of Who Wants to Be a Mathematician. 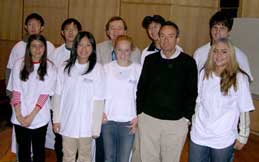 In each game, four contestants competed for prizes and the chance at the $2000 grand prize.

Zhou then joined Danny on stage to answer the bonus question. The audience grew silent as Danny and Zhou (pictured below with Mike) analyzed the question. After time expired, and the contestants had made their selections, the audience was polled on the four choices. Two choices got the most support, but there was no clear favorite. There was, however, a clear favorite for the two contestants: They both selected the correct answer and each won the $2000 grand prize! 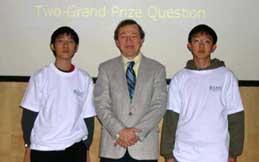 Here are the prizes won by each contestant:

Calculus by Anton, Bivens and Davis from John Wiley and Sons: Yuri Takeuchi and Siwen Wu

What's Happening in the Mathematical Sciences by Barry Cipra from the AMS: Molly Johnston and Rachel Wiedermann

The AMS thanks game sponsors Maplesoft, Texas Instruments, and John Wiley and Sons for their continued support of the game, the New York Hall of Science for hosting the event, and the teachers who made the effort to bring their students to the lecture and game. Also, a hearty congratulations to all the contestants who competed and put on an exciting show. 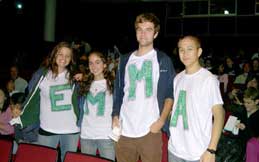 The Arnold Ross Lectures are annual lectures sponsored by the AMS and held at science museums across the country. Read about the 2004 lecture by Elwyn Berlekamp in St. Louis.

Photographs by Who Wants to Be a Mathematician judge and co-creator Bill Butterworth of the DePaul University Department of Mathematical Sciences..