"We enjoyed our day at the museum. The lecture provoked an interesting discussion on the bus ride home about the parallel development of mathematics in different cultures. Thanks to the AMS for providing this opportunity."

"We had a great day - wish you came to Chicago every year!"

Approximately 300 high school students from the Chicago area attended the Arnold Ross Lecture by Manjul Bhargava (Princeton University) and the game Who Wants to Be a Mathematician at the Museum of Science and Industry on October 24.

Bhargava was introduced by Glenn Stevens (Boston University), chair of the Arnold Ross Lecture Series Committee, and Paul Sally, Jr. (University of Chicago). Sally, who has been instrumental in the establishment and continuance of the Arnold Ross Lectures, gave some background about Arnold Ross (see the Notices for an August 2001 interview) and the lectures. Stevens, himself a product of the Arnold Ross program, pointed out that this lecture was the 17th and told a short story about Bhargava. One day in the 1990s, Stevens' secretary took a call from a student interested in BU's PROMYS program for young scholars. The secretary told Stevens that they just had to save a spot in the program for this student because he was so nice. The student was Bhargava and, as the Chicago audience could see, he is still nice.

Another question is: How many rhythms are possible using k short syllables and n-k long syllables? A Sanskrit poet solved this problem in 500 B.C., using what he called a "mountain of jewels." This mountain is what is often called Pascal's triangle, but it was discovered long before Pascal's time. The solution to this problem is the combination of n things taken k at a time, or "n choose k." Bhargava also gave an elegant proof of this result, then showed that a "shallow diagonal" in the mountain/triangle connects the two problems, because the sum along that type of diagonal is a Fibonacci number. He also extended the problem to poetry with three types of syllables, which gives a three-dimensional mountain of jewels.

He concluded the talk with a demonstration of more rhythms on his tabla and showed how the rhythms' names are connected with error-correcting codes.

As much as anyone likes free food, it seemed as if the audience could have foregone the subsequent snack break and listened to Bhargava for the whole day. After the break, it was time for Who Wants to Be a Mathematician. 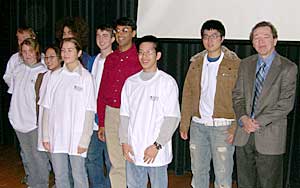 The contestants who played Who Wants to Be a Mathematician are:

In game one, Kristine and Cory were tied for the first four questions. Kristine then moved into first for a time, before Cory overtook her and won the game. Winning the game earned Cory a place in the bonus round, but he had to wait for game two to be played before having a chance at the $2000 bonus question. 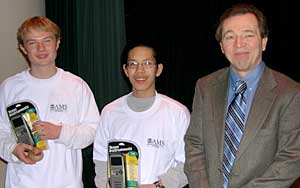 Winston and Cory then attempted the bonus "Two-Grand Prize" question. It was about properties of a binary opearation. After three minutes of concentration and calculations, both offered their explanations of their chosen response and the audience was polled for its choice. During Winston's very good explanation, he seemed to talk himself into a different choice, which turned out to be Cory's choice as well. With the stage set, the correct choice - Cory's - was revealed. Thus, he won the $2000. 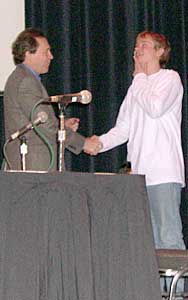 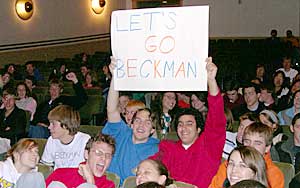 The audience enjoyed the game and enjoyed rooting for the contestants, and was especially captivated by the wonderful Arnold Ross Lecture given by Manjul Bhargava. The AMS thanks the Arnold Ross Lecture Series Committee for its arrangements, and thanks Manjul Bhargava and the contestants for providing such an enjoyable morning. The AMS also thanks the teachers from the participating schools for their role in the event, and extends its gratitude to Texas Instruments, Maplesoft, and John Wiley and Sons for supporting Who Wants to Be a Mathematician.

The Arnold Ross Lectures are annual lectures sponsored by the AMS and held at science museums across the country. Read about the 2005 lecture by Ken Ribet in New York.

Photographs by Who Wants to Be a Mathematician judge and co-creator Bill Butterworth of the DePaul University Department of Mathematical Sciences, and by AMS Public Awareness Officer and game co-creator and emcee Mike Breen.

Find out more about Who Wants to be aMathematician.