"Thank you so much for all of your hard work in putting together the presentation and game. My students were buzzing about it all the way back to school and we are really excited to tell everybody about Yushi's success."

"That was an excellent day and a great competition.  All of the students were happy they went."

"Thank you so much!! Our kids were thrilled and the whole school was excited that Jeff and Demetrius did so well."

On October 23, David Kelly of Hampshire College gave the 2008 Arnold Ross Lecture at the Oregon Museum of Science and Industry (OMSI) to over 100 students from the Portland (OR) area. Following the lecture, eight of those students played Who Wants to Be a Mathematician. Below is a summary of the day’s events.

From Pascal's Triangle to Sierpinski's Triangle in Base 2, David Kelly, Hampshire College

Roger Nelson (far left, above) of Lewis and Clark College introduced “Kelly” (below), noting the speaker’s obsession with yellow pigs and the number 17. Kelly directs the Hampshire College Summer Studies in Mathematics program for high school students at Hampshire College in Massachusetts. Next year’s session will be the program’s 37th.

Kelly began his lecture with a slide of Pascal’s Triangle.

The triangle was created in China in 1303, nearly 300 years before Pascal was born. So, as is true with many other names in mathematics, Pascal did not originate the “triangle” named for him. Kelly then made a connection between Pascal’s Triangle and the Sierpinski Triangle. Using colors corresponding to the to the highest power of 2 that divides the number and zooming out from Pascal’s Triangle, you get an image that approximates the Sierpinski triangle (57K PDF, courtesy of David Kelly). Kelly has such an image on his bathroom floor.

As Kelly was making one of the tables, he got one of the entries wrong and explained that when he makes such a mistake in class he tells his students, “I’m allowed to make mistakes like that because I didn’t have as good a teacher as you have.”

The results above can be used to find, for example, how many odd numbers are in the 35th row of Pascal’s triangle. Since 35 is 100011 in base two, there must be 23 = 8 odd numbers in the 35th row. Before taking questions, Kelly proved that F(n) + B(n) = n and showed part of a more elegant proof using induction. He left the rest of the proof for the students.

In response to a question about his favorite subject in mathematics, Kelly said that he enjoys many areas in mathematics, but probability may be his favorite. He also encouraged the students to take courses such as linear algebra once they have taken calculus but before taking multivariable calculus and differential equations—provided they consult their own advisors first.

There were three winners in the two games of Who Wants to Be a Mathematician, due to a technical glitch caused mostly by the typing of game emcee Mike Breen (who had much better emcees than the audience had that day). Jeff Wall of Cleveland High School won US$1000, and Yushi Wang of Sunset High School and Avi Levy of West Linn High School each won $500. All eight contestants are pictured below (and listed below the pictures, left to right), along with the audience, in full game mode.

In the Square-Off Round, Jeff answered quickly and correctly again, winning the one-question round and getting a place in the Bonus Round: One question worth $2000. Given Jeff’s amazing alacrity, perhaps the time limit on the question should have been 30 seconds instead of three minutes because, unfortunately, Jeff answered this question incorrectly.

Normally that is the end of the game, but Avi and a couple of his classmates discovered a mistake on the last question of game two. No one chose what was the correct answer but the mistake did cost Avi first place, so he was given a chance at a different bonus question. Like Jeff, Avi narrowed it down to two choices, but unfortunately also like Jeff, he chose the wrong one. He did merit $500 and a TI-Nspire graphing calculator for what would have been a win for him in game two.

The AMS thanks sponsors Texas Instruments, Maplesoft, and John Wiley and Sons for their continued generous support of Who Wants to Be a Mathematician. Thanks also to OMSI for hosting the event and to the Portland area teachers and students who attended. 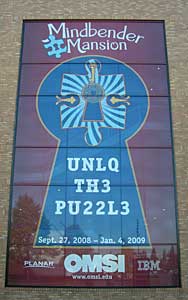