Thomas Hales Gives the 2010 Arnold Ross Lecture, Followed by Who Wants to Be a Mathematician

The Arnold Ross Lecture and Who Wants to Be a Mathematician traveled to the Carnegie Science Center in Pittsburgh, Pennsylvania on October 14 for an informative and exciting day of mathematics. A summary of the lecture and contest, including videos of the contest, is below.

"They had a great time playing and the rest of my class did playing along as well. We also enjoyed the lecture very much. The students I brought are all extremely interested in mathematics. They're all seniors from my Linear Algebra class, a very talented bunch who all passed BC Calculus last year, so they really enjoyed the day. I hope that you return to Pittsburgh soon!"

"Thank you for the excellent event. My students and I thoroughly enjoyed the lecture and the competition."

"Thank you for the opportunity for our student to participate in the “Who Wants to Be a Mathematician” game today. She and the rest of our students had a great time. We hope that you will be coming to our area again in the future. The day was a great experience for our students." 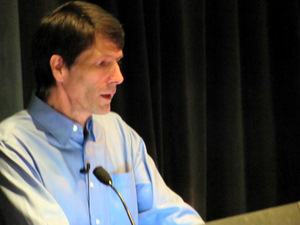 Hales talked about packing problems, giving their history and why they are important in modern mathematics and its applications.

His first example was packing tetrahedra, that is, putting them together to fill space. Aristotle thought that all of space could be filled by arranging tetrahedra so that five of the solids were arranged around every edge of each tetrahedron, but it turns out that that configuration leaves a small gap: The tetrahedra don't quite fit together, or fill space, as imagined.

Hales then moved to packing spheres. He showed what looked like two different arrangements of spheres--one tetrahedral and the other pyramidal (pictured, below left)--which turned out to be the same face-centered cubic arrangement (Hales is holding them together, below right), cut at different angles. This packing is familiar to many as it is often used in grocery stores to pack oranges, for example.

In the 1500s Sir Walter Raleigh wanted to know how many cannonballs were in the stacks in his ships. Hales showed the audience how Raleigh's advisor, Thomas Harriot, used what is known as Pascal's Triangle, to solve the problem. Although determining the most efficient method for packing the spheres is a 400-year old problem, it is used today in error-correcting codes, which are important in digitized media such as music.

Whether this face-centered cubic packing is the most efficient became known as the Kepler Conjecture and was undecided until Hales submitted a proof of this conjecture, which 12 referees examined over an 8-year period. At the end of this time they said that they were 99% sure that the proof was correct but could not be 100% sure, so he began trying to teach computers to do mathematical proofs. Hales showed the audience the journal issue that was his proof, which, although long, wasn't as long as others.

Hales concluded with another example that united a fairly old conjecture and modern mathematics. The question was how to divide space into cells of equal volume that have the least area of surface between them. Lord Kelvin thought that the cells were truncated octahedra. This was believed to be correct until 1994 when two physicists Phelan and Weaire discovered a counterexample (pictured below left). Their configuration served as the basis for the design of The Cube, the aquatics center at the 2008 Summer Olympics. Since then, many configurations better than Kelvin's (e.g., below right) have been found.


After the lecture and some nice refreshments, eight Pittsburgh-area high school students played Who Wants to Be a Mathematician. The big winners were Michael Matty of Pine-Richland High School and Chrissy Martin of Steel Valley High School, who won US$1000 and $500, respectively, from the AMS, and each won a TI-Nspire graphing calculator from Texas Instruments.


Unfortunately, Michael did not get the Bonus Question, which concerned three mutually tangent circles inscribe in a larger circle, but he and Chrissy still got paid the big bucks. 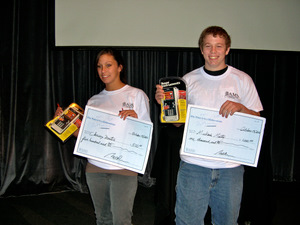 The AMS thanks sponsors Texas Instruments, Maplesoft, and John Wiley and Sons for their continued generous support of Who Wants to Be a Mathematician. Thanks also to the Carnegie Science Center for hosting the event and to the Pittsburgh area teachers and students who attended. 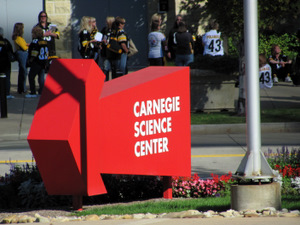