Erik Demaine Gives the Arnold Ross Lecture at MoMath, Followed by Who Wants to Be a Mathematician

"Emily and Hope enjoyed the game and their peers really enjoyed watching it! Thank you for that opportunity. The students also enjoyed the lecture and then visiting the exhibits in MoMath. The event was wonderful."

"Thanks for having us as part of the festivities. The kids are still talking about the show and the entire day. They had a great time as did the other chaperone and I."

On April 15 the National Museum of Mathematics (MoMath) in New York was the site of the Spring 2013 Arnold Ross Lecture and Who Wants to Be a Mathematician. Below are descriptions, pictures and videos of the lecture by Erik Demaine (MIT) and the game, as well as a slideshow of some of the exhibits at the new museum.

Slideshow of images from the lecture:

The museum's founder and co-executive director (with Cindy Lawrence), Glen Whitney, welcomed over 150 students and teachers, and introduced David Pollack (Wesleyan University), former chair of the Arnold Ross Lecture Series committee. Both Whitney and Pollack had participated in Ross's Young Scholars Program when they were students, Whitney for three years and Pollack for six years. Pollack gave the audience some background about the lecture series and about Erik Demaine, noting that he has art in both the Smithsonian and the Modern Museum of Art, and that he got his PhD at 20 and became a professor at MIT the same year.

Demaine started by saying that mathematics is everywhere in the world and is also a lot of fun. He gave many examples of the work that he's done in math and in art, especially origami, and often in collaboration with others. Demaine explained how his homeschooling experience with his father, Martin, helped bring about his collaborative spirit. He also gave examples of puzzles--mentioning the complexity of some--and magic, and concluded with an audience participation exercise with rope, which appeared quite magical. He called it the Picture-Hanging Puzzle and showed how it connects algebra and topology.

Here is a video of part of his lecture, which shows some self-folding materials:

Demaine also showed a video of a puzzle involving a six-sided die, but not a standard die. In this case, the die is much larger than usual and had his father inside while it was being rolled.

Following the lecture, which the students and teachers enjoyed very much, people took a brief tour of the exhibits (images below taken about a month before the lecture).

and then returned for ... 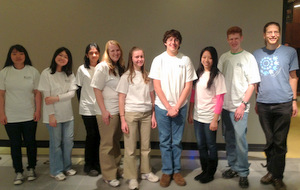 Although six of the eight contestants were female, it must have been a day for Erix, as Eric Schneider, a senior from High Technology High School (NJ), was the big winner. Below are several videos from the game (they're part of the YouTube playlist from the day, and so start with a video of the lecture, which you may have already seen above).

A slideshow of the contestants and games:

At the halfway point of game one, Nick held the lead by 100 points over Eric, with Hope 100 points behind Eric. Eric took the lead on question five and held it for the rest of the game. Minyi rallied at the end and moved into a tie with Nick for second. Eric's victory earned him $500 from the AMS, a TI-Nspire CX from Texas Instruments, and a spot in the Square-Off Round against the eventual game-two winner.

Game two saw a few more lead changes than the previous game. Cynthia led at the halfway point, with Pallavi in second and Emily and ChuQi tied for third. Pallavi was the only contestant to answer questions five and six correctly and led Cynthia by 1000 points going into the last two questions. Cynthia answered both questions correctly, however, to win the game, a slot in the Square-Off Round and the same cash and prizes that Eric had won. ChuQi also answered the last two questions correctly and finished in second place.

The AMS thanks sponsors Texas Instruments, Maplesoft, and John Wiley and Sons for their continued generous support of Who Wants to Be a Mathematician. Thanks also to MoMath for hosting the event and to the New York-area teachers and students (and bus drivers) who negotiated the tunnels and traffic to attend.