Henry Cohn Gives the 2014 Arnold Ross Lecture at The Leonardo in Salt Lake City, Followed by Who Wants to Be a Mathematician 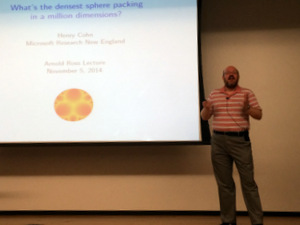 Over 150 high school students and teachers from the Salt Lake City area took advantage of a great opportunity to hear Henry Cohn (Microsoft Research and MIT) deliver the 2014 Arnold Ross Lecture, "What's the densest sphere packing in a million dimensions?" at The Leonardo in Salt Lake City on November 5. Following the lecture, and some well-received snacks, eight of the students played Who Wants to Be a Mathematician.

What's the densest sphere packing in a million dimensions?

Peter Trapa (above left), chair of the Arnold Ross Committee and of the University of Utah Department of Mathematics, welcomed the audience to the lecture, giving some history of Arnold Ross, the lecture series, and of Cohn. He explained that the lecture series was made possible by Paul Sally, whom Trapa said was "a fantastic guy and a towering man who looked--and swore--like a swashbuckling pirate." Cohn is a former student of PROMYS, an off-shoot of the Arnold Ross Program for high school students, and is now a PROMYS Foundation trustee. Later he was one of the founding members of Microsoft Research New England.

Cohn explained that sphere-packing involves filling space with spheres efficiently. Although how to do this in three dimensions has been known for a while (witness oranges in the produce section), it took 300 years to find a proof that the standard packing is the most efficient, and how to pack efficiently in higher dimensions is neither easy to see nor prove. Cohn traced the history of the problem, alluding to Thomas Harriot, who was the first to study the problem even though Kepler's name is attached to it, Claude Shannon, who showed that high-dimensional sphere packing is relevant to how to communicate effectively, and Alicia Boole Stott, who could visualize the problem and other structures in four dimensions.

Cohn explained the curse of dimensionality: Volume scales as 2n in n dimensions, so that the space's volume increases exponentially with the dimension, which makes searching difficult. He noted that today almost all data is high-dimensional, so even though spaces of 1,000 dimensions, for example, may seem unusual, it is actually the lower dimensions of two and three that we are used to which are anomalous. He also explained that "math = freedom" in that, for example, dimensions need not be length or width, but can be anything. 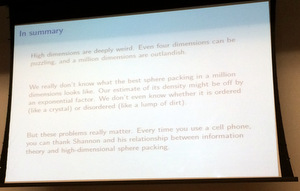 Throughout his lecture, Cohn encouraged questions, often pausing to give people time to ask a question, and audience members asked many. When he was done, he received a standing ovation. See slides of the lecture.

Slideshow from the lecture and game: 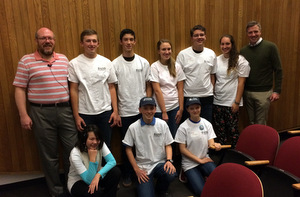 Below are descriptions of the games followed by videos from the games:

Square-Off Round and Bonus: 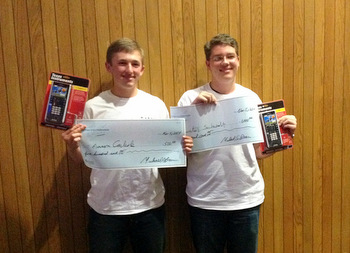 Prizes and money won that day:

Thanks to the audience, which was extremely enthusiastic in its support of the contestants, but quiet while contestants were thinking, and especially to the teachers who arranged for their students to participate in the 2014 Arnold Ross Lecture. The AMS also thanks sponsors Texas Instruments, Maplesoft, and John Wiley and Sons for their continued generous support of Who Wants to Be a Mathematician, The Leonardo for hosting the event, and Kylie Germain of the museum who helped arrange everything.

Photographs and video by Robin Aguiar, AMS Meetings and Professional Services. Text and other photos by AMS Public Awareneness Officer and Who Wants to Be a Mathematician emcee Mike Breen.