Nancy Kopell Gives the 2016 Arnold Ross Lecture, Followed by Who Wants to Be a Mathematician 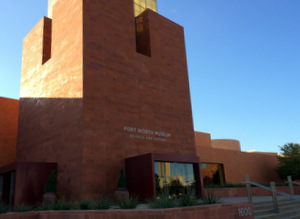 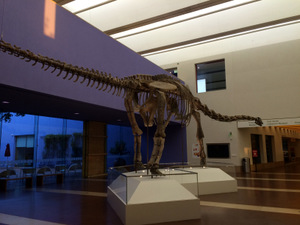 About 150 students and teachers from the Forth Worth area learned some of the mathematics involved in understanding brain rhythms during the 2016 Arnold Ross Lecture by Nancy Kopell of Boston University, which took place at the Fort Worth Museum of Science and Industry on October 27. Following the lecture, eight of those students played Who Wants to Be a Mathematician. 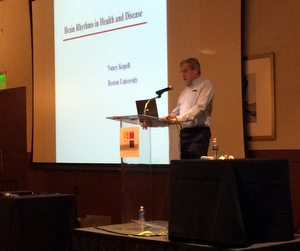 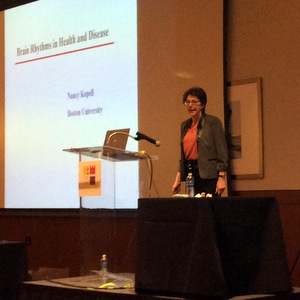 Glenn Stevens (above left), chair of the Arnold Ross Lecture Series Committee, gave the audience some background about Arnold Ross and the lecture series, and introduced his Boston University colleague, Nancy Kopell (above right). She gave the audience insight into how the brain works and how math is used to understand the brain, especially its rhythms.

Tests such as electroencephalograms (EEGs) measure brain activity and math helps decipher the test results by eliminating noise and retrieving the important signals from the tests. There is a stong association between brain behavior and brain rhythms, such as alpha and beta, and Kopell said that all known forms of neurological disease are associated with changes in rhythms. In fact, the changes in those rhythms may be responsible for the symptoms. For example, increased beta rhythms are present in people with Parkinson's disease. As a coda, Kopell pointed out a connection between brain rhythms and a Fibonacci sequence. 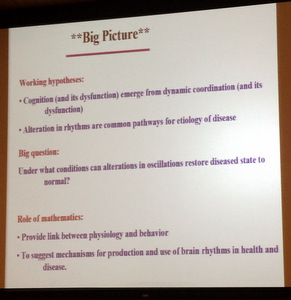 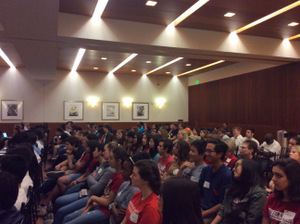 During the question-and-answer period, which featured many questions, Kopell said that it took a great deal of mathematics to understand the results she presented in her lecture, and those results represented a tremendous amount of work over a very long time. She added that she hoped that some of the students in the audience would eventually join her in the research and help solve some of the unanswered questions about brain health and disease.

Following a break featuring mathematically themed cookies, the eight students below (in t-shirts) participated in Who Wants to Be a Mathematician. 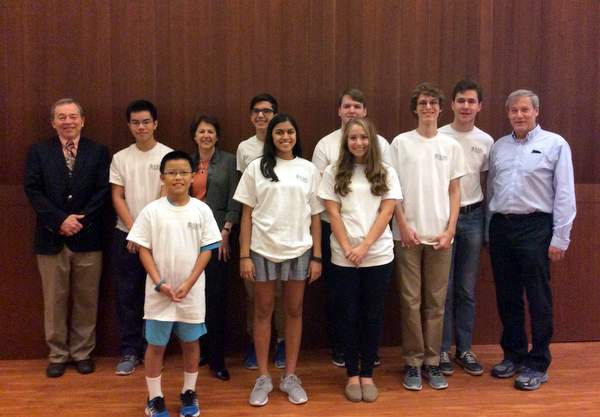 Harris To, a sophomore at Trinity Valley School, was the big winner in the game. Here he is just after his victory. (We'll have more videos soon.)

Recap of the games: 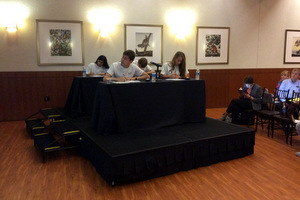 Nicholas and Garrett were tied for much of the game, but Nicholas edged ahead on question six and missed only the last question to win $500 from the AMS and a TI-Nspire CX from Texas Instruments. Mackenzie and Garrett tied for second. Garrett opted for Maple 2016 and Garrett chose Anton's Calculus with Early Transcendentals. 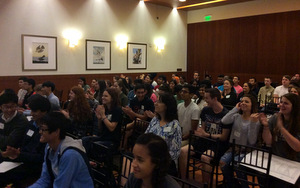 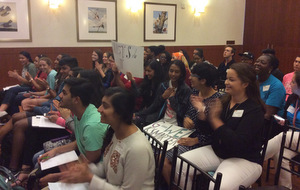 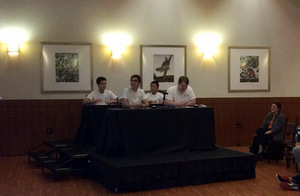 This game featured the youngest student in Who Wants to Be a Mathematician history, Eric Tong, who is a fifth grader. He and Harris were tied after two questions, but Harris answered the next two correctly, which moved him into first place. He maintained that lead until the end, earning him the same prizes that Nicholas won in game one and a spot in the Square-Off Round against Nicholas to see who would win another $500 and a chance at the $2,000 Bonus Question.

Nicholas and Harris went head-to-head in the Square-Off Round (below left). Harris signaled in just before Nicholas and was correct, so he won another $500 and a chance at the $2,000 Bonus Question (right). Unfortunately, Harris was not correct on the question, but still won $1,000 and the TI-Nspire CX. 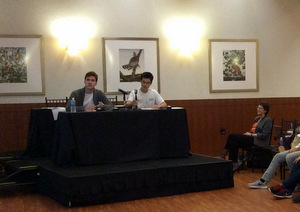 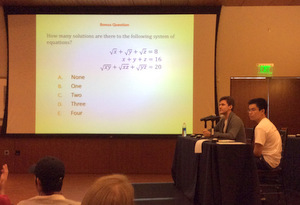 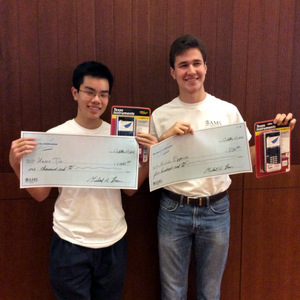 Here is a collection of photos from that day: 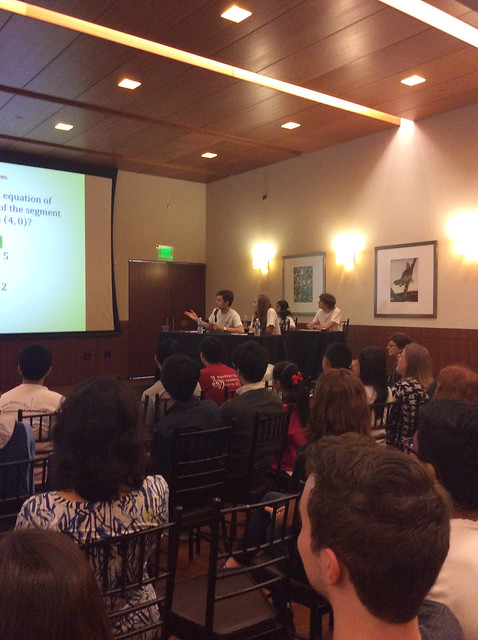 Below are the cash and prizes awarded to the contestants.

The students and teachers were a very enthusiastic audience, and many brought signs to root on their classmates. 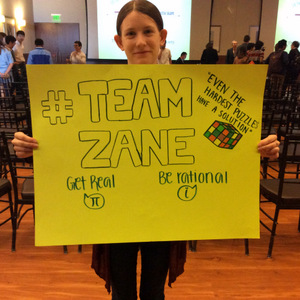 Thanks very much to our sponsors: Maplesoft, the Who Wants to Be a Mathematician Technology Sponsor; Art of Problem Solving, our Online Community Sponsor; Texas Instruments; and John Wiley and Sons. Thanks also to the people at the Fort Worth Museum of Science and History who provided a great facility and services for the lecture and game. And thanks to the teachers and students who were very engaged by the lecture and the game. 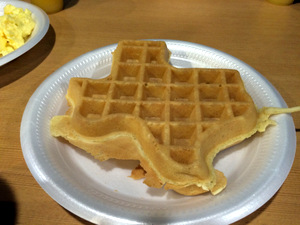 Breakfast the day of the game. Despite having snarfed waffles on many Who Wants to Be a Mathematician trips, game staffers could not recall eating any breakfast foods intentionally shaped like states they were in, e.g. Rhode Island.

Find out more about the Arnold Ross Lectures and  Who Wants to Be a Mathematician.