The 2018 Arnold Ross Lecture by Tadashi Tokieda, Followed by Who Wants to Be a Mathematician 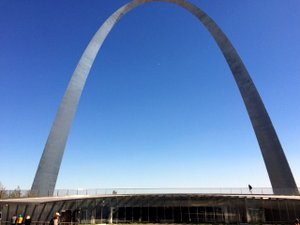 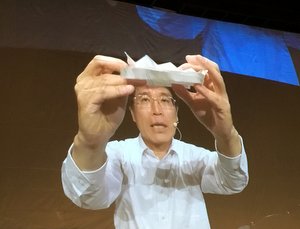 Tadashi Tokieda, known for his keen observations, fascinating explorations, and delightful explanations, shared some of his insights and discoveries with about 200 St. Louis-area high school students and teachers during his 2018 Arnold Ross Lecture at the St. Louis Science Center on October 24. After the lecture, and some mathematically themed snacks, eight of those students played Who Wants to Be a Mathematician. 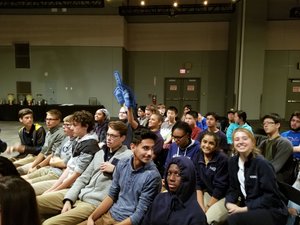 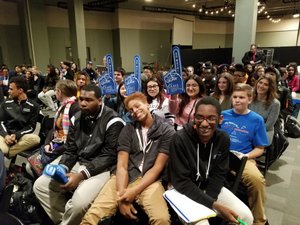 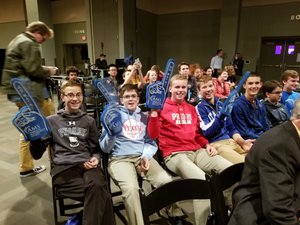 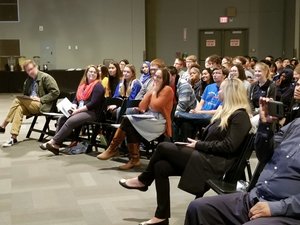 "A World from a Sheet of Paper," Tadashi Tokieda, Stanford University

Tokieda began the lecture by saying that he thinks a sheet of paper's dimension should be 2.5, not 2, since it can be manipulated to have properties of three-dimensional objects. As evidence, he showed how he could pass a circular coaster through a square hole in a piece of paper, even though the diameter of the coaster was greater than the diagonal of the square!

He then showed how to trisect any angle using paper-folding (in fact, how to subdivide any angle into n parts for any positive integer n) and how to construct an n-gon for any n. Both results are impossible with standard constructions that use an unmarked straightedge and compass. 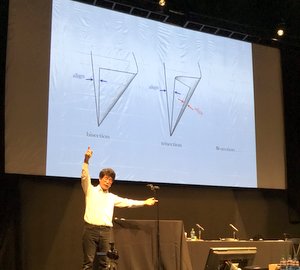 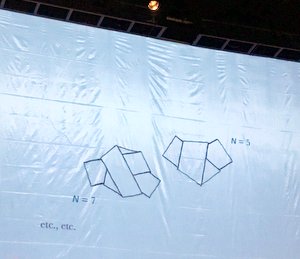 Then he turned to crumpling, explaining that it is present on many scales: on the small scale, making origami paper, to a medium scale, in the folds of the skin of an elephant, and to the large scale, in the creation of the Andes. 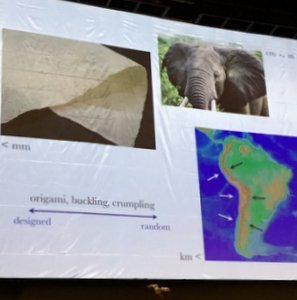 Although crumpling a piece of paper may look random, when segments are drawn on paper along the lines of the crumples, there are two nice properties: 1. The number of segments meeting at any point is even, and 2. An alternating sum of the measures of the angles formed by the segments is zero. 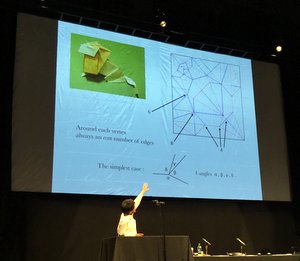 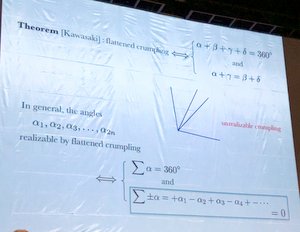 He also showed a fold (shown at the top of the page) by Miura Ori that was used in a satellite's solar panel so that it would be compact in the rocket that carried it into space, and would deploy easily when unfolded. The key was a fold that had one degree of freedom, so that its folding and unfolding were both simple--unlike what happens with road map. 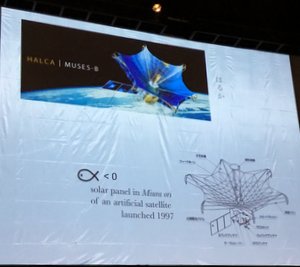 Tokieda engaged the audience with his demonstrations and ideas, and they were eager to ask questions when he finished.

After the lecture, and a refreshment break that featured some cookies with math expressions on them, Joseph Gioia, a senior at the St. Louis Priory School, won \$3,000 playing Who Wants to Be a Mathematician. Below are videos of game action along with a video of Joseph just after his victory, followed by photos and a short description of the games that day:

A Flickr slideshow of a few photos from the day: 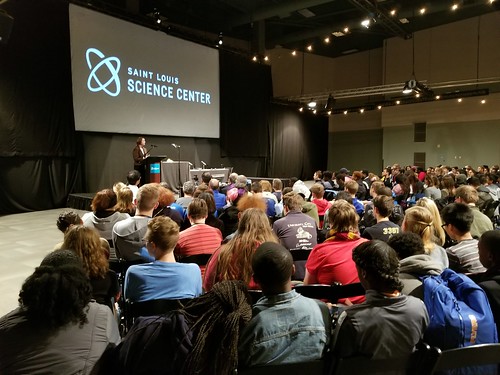 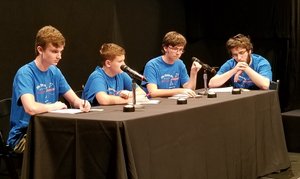 Both games were very close: In each game, the top three contestants were separated by only 500 points. In game one, Jacob and Moses shared the lead until the seventh question, which Joseph was the only contestant to answer correctly. That moved him into first and, after he, Moses, and Jacob answered the last question correctly, Joseph won the game. The win earned him \$500, a TI-Nspire CX, and a spot in the Square-Off Round against the eventual game two winner. 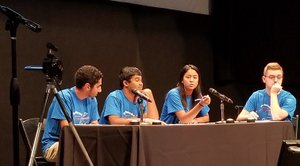 In game two, Seema held at least a share of the lead until question six. Dominic answered that one correctly to take over first place, much to the delight of his University City rooting section. Seema then retook the lead after question seven and answered the last question correctly, along with Devin and Dominic, to win the same prizes that Joseph had won in game one. 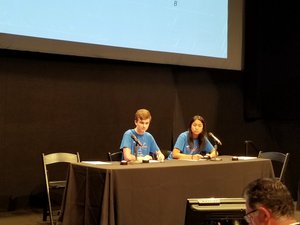 In this round, Seema and Joseph competed on one question--the first person to get it right would win another \$500 and a chance at the \$2,000 Bonus Question. Seema signaled in first, but was wrong. Joseph then had 60 seconds to answer. He took almost all the time and was correct, so he advanced. 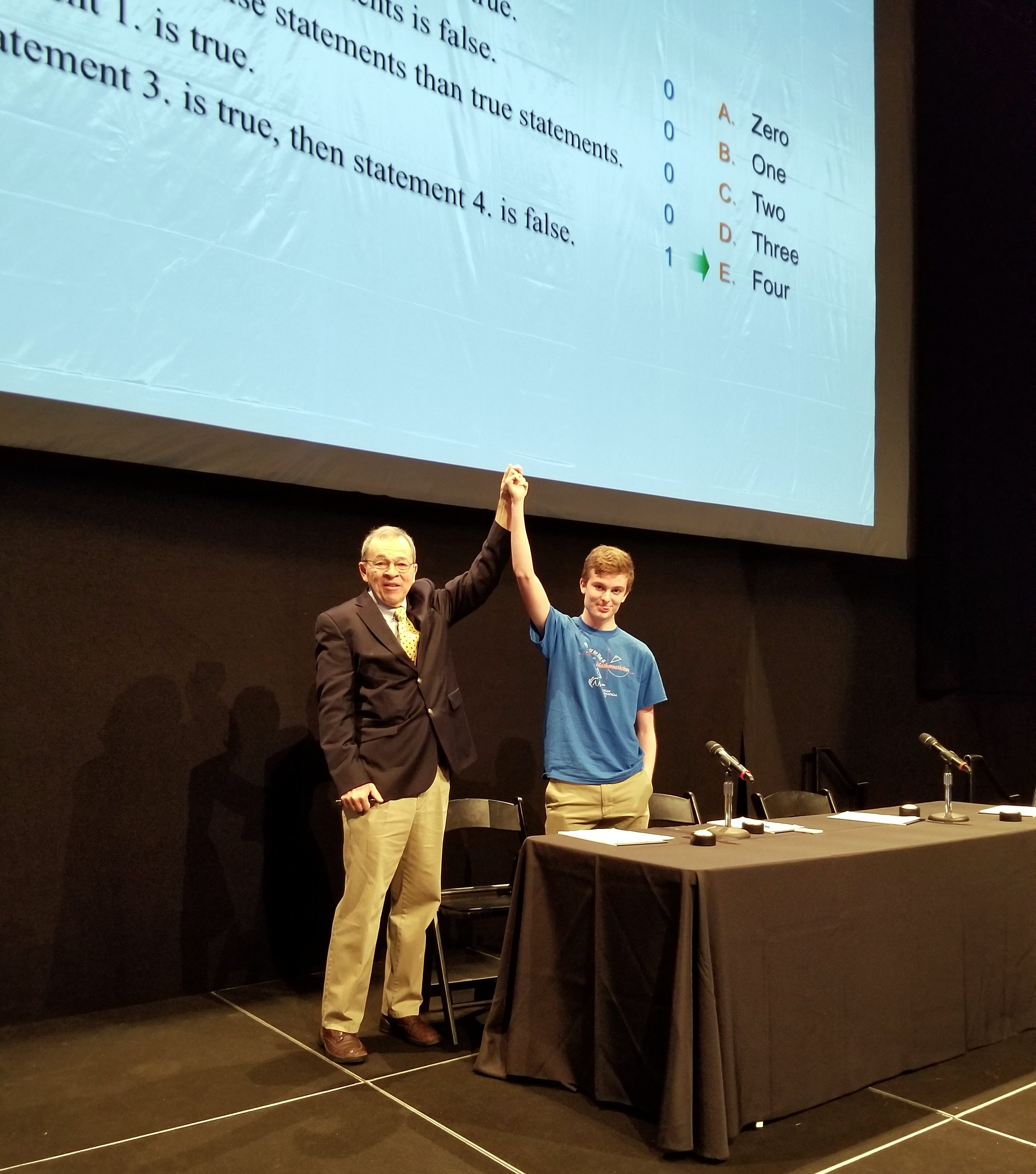 The Bonus Question involved logic. Joseph thought about it for almost the entire three minutes, signaling his answer with about 10 seconds to go. He used the time wisely, as it turns out, getting the question correct and pulling in \$3,000 for his morning's (and a little afternoon's) work.

Here are all the prizes awarded from the game:

(Note: Jacob and Moses tied for second in game one, and agreed on the prizes listed above.)

The students and teachers, who attended and enjoyed the lecture, snacks, and Who Wants to Be a Mathematician.

The nice people at the St. Louis Science Center, who arranged everything at the location.

Find out more about the Arnold Ross Lectures and Who Wants to Be a Mathematician. .

Robin Hagan Aguiar, who coordinated the lecture (and got the cookies), and Sandy Breen, former Notices managing editor, took all the photos. Sandy shot the video. Text by AMS Public Awareness Officer and Who Wants to Be a Mathematician host Mike Breen.