Who Wants to Be a Mathematician traveled to Iowa City--home of the University of Iowa and the Midwestern site for the 35th American Regions Mathematics League (ARML) competition--for a rare nighttime event on Friday, June 4. Over 300 students from states extending from Texas to Minnesota took part in the AMRL competition in Iowa City. 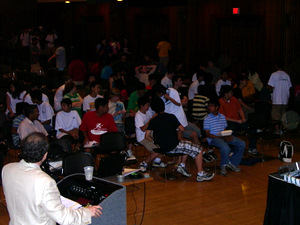 In addition, eight four-person teams (representing Chicago, Indiana, Iowa, Michigan, Minnesota, Missouri, Texas, and Wisconsin-Kansas) played two games of a team version of Who Wants to Be a Mathematician. The big winners (pictured below) were from Texas, who took home four TI-Nspire graphing calculators from Texas Instruments and $3200 in cash from the AMS. 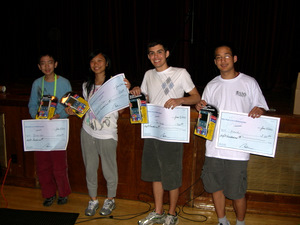 The teams from Missouri and Texas were tied at the halfway point of game one, but Texas pulled away from everyone in the second half of the game to win. In fact, the team from Texas answered the individual and team parts of every question correctly. After a slow start, the Minnesota team caught Missouri and the two teams tied for second.

Game two was a wild one. Each of the four teams held at least a share of first place at some point in the game. The winner was the team from Chicago (pictured below), which won by giving correct answers on the last two questions (both individual and team on question 7, and individually on question 8). This earned Chicago (and Texas earlier) four TI-Nspires, \$600, and a trip to the Square-Off Round, in which the first individual to answer correctly would win another \$600 for his or her team and a chance at the $2000 Bonus Question. 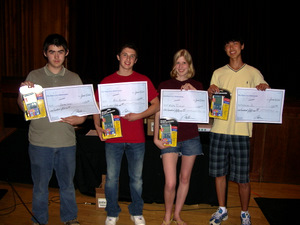 Two members from each team played in the Square-Off Round. Bobby Shen from Texas, who finished second nationwide in the individual part of the AMRL competition, signaled in on an algebra question even before it had been read and was correct. So Texas advanced to the Bonus Round. 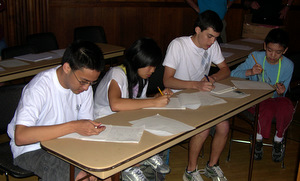 The team members were allowed to confer on the Bonus Question. They talked for about two of the allotted three minutes and then made up their minds. Their choice was the audience favorite and the correct answer, which earned Texas another $2000. Here are the prizes won by all 32 contestants (for each prize, each person won that prize or cash amount):

Thanks to the sponsors Texas Instruments, Maplesoft, and John Wiley and Sons, for their continued support of Who Wants to Be a Mathematician and for furnishing four times the prizes usually awarded. Thanks also to Steven Condie, ARML Midwestern site coordinator, and Bryan Sullivan, ARML president, for making all the arrangements for the contest. 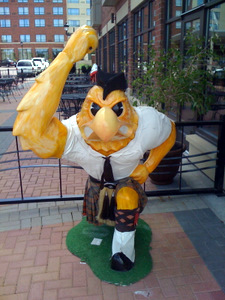 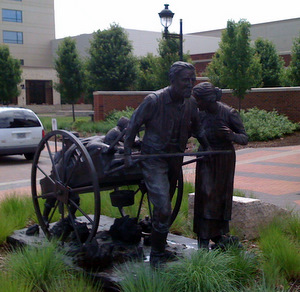 (Clockwise from top left: Herky the Hawkeye, statue of an underhorsed family, and the other IMU)