A team from Florida won $4,000 total and a TI-Nspire CX for each team member when eight four-member teams competed in Who Wants to Be a Mathematician at the American Regions Mathematics League (ARML) at the University of Georgia on May 29. Here are the members of the winning team just after their victory.

Slideshow of the teams and games:

And a photo of the night's contestants:

Normally, Who Wants to Be a Mathematician involves individual contestants but since ARML is a team competition, the Who Wants to Be a Mathematician format is adapted--for example, the questions are harder--and teams compete. All the questions in the games and other rounds, which were written by ARML President Paul Dreyer, involved challenging math and were related to TV game shows, from To Tell the Truth to Total Wipe Out. 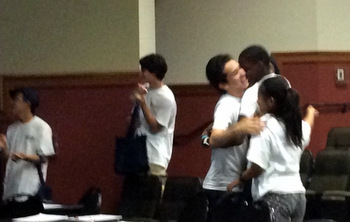 Below are all the prizes and cash won by the contestants. Each team member received the indicated prize but the cash amounts listed are the total amounts for the team.

Thanks very much to our sponsors: Maplesoft, the Who Wants to Be a Mathematician technology sponsor, Texas Instruments, and John Wiley and Sons. Thanks also to Paul Dreyer, Debbie Poss, Dorris Gann, and Ray Gann, for arranging logistics and helping the night of the game.

Video and photos by Dorris Gann. Text by Mike Breen.

Find out more about Who Wants to Be a Mathematician and the ARML competition.