Who Wants to Be a Mathematician at the 2017 ARML Competition

A team from the San Francisco Bay Area won $3,000 (total) and one TI-Nspire each playing a team version of Who Wants to Be a Mathematician at the University of Nevada, Las Vegas (UNLV), which is the western site of the American Regions Mathematics League (ARML) competition. The game was a special event at the two-day competition. Here are the San Francisco Bay Area (SFBA) contestants just after their victory:

The ARML competition at UNLV featured participants from the western part of the U.S. as well as from Pacific nations who competed as 15-person teams.

Four teams participated in each game, while other participants in the ARML competition watched. Here are the team members from game one (from China, Colorado, Northern Nevada, and Southern California): 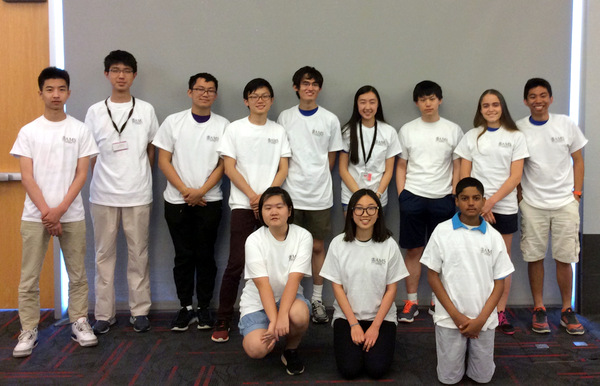 and from game two (from Korea, Oregon, Wild Wild West, and SFBA): 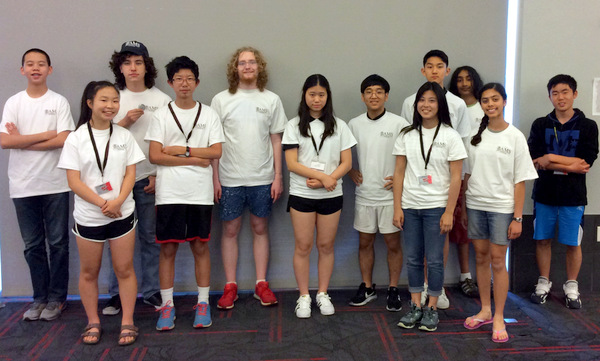 The Who Wants to Be a Mathematician contestants were cheered on by about 400 ARML Western Site participants. 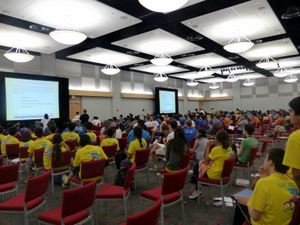 Here is the final screen from game one, showing the order of the teams from that game. The win earned the Colorado team a total of $500 (eventually increased to the next multiple of three) and a TI-Nspire CX for each team member. The win also gave Colorado a spot in the Square-Off Round against the eventual game two winner. 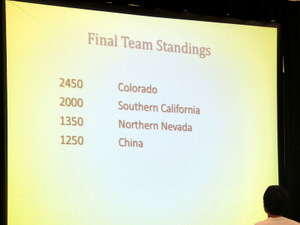 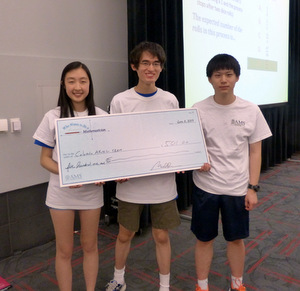 The SFBA team won a close match in game two, edging out the teams from Wild Wild West, Oregon, and Korea. To the right is the last question from game two. 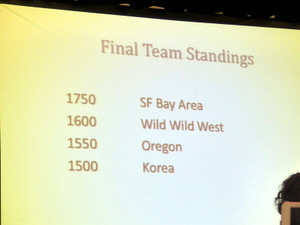 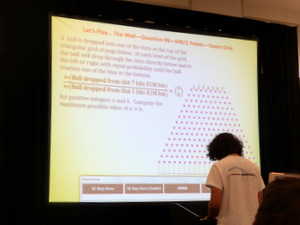 The Colorado and SFBA teams then went head-to-head on the Square-Off question, which SFBA was first to answer correctly. This earned them another \$500 and a chance at the \$2,000 Bonus Question, which they could work on as a team. The question was a tough one, about probability, but SFBA answered correctly to bring the team's winnings to $3,000. 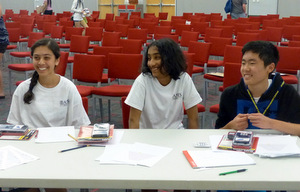 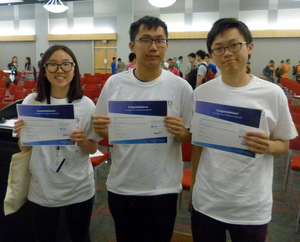 Below are the cash and prizes awarded to the teams. The cash amounts are the team totals, but each individual on the teams won a copy of the corresponding books and software.

Thanks very much to our sponsors: Maplesoft, the Who Wants to Be a Mathematician Technology Sponsor; Art of Problem Solving, the Online Community Sponsor; Texas Instruments; and John Wiley and Sons. Thanks also to those who helped bring the game to ARML and helped make it come to life that day: ARML President Paul Dreyer, Western site coordinator Matt Schneider, Caroline Kinyua, Kendra Brashear, and Jiyeong Gu.

Find out more about ARML.

Find out more about Who Wants to Be a Mathematician

Video by Who Wants to Be a Mathematician co-creator and tech wizard Bill Butterworth, DePaul University. Almost all photos (except the game one and game two contestant photos) by James Toller. Text by Mike Breen, who can be seen below impersonating a proctor during the Super Relay round. 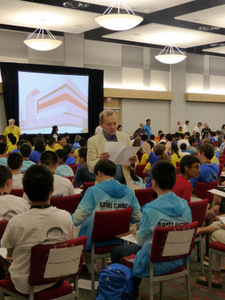