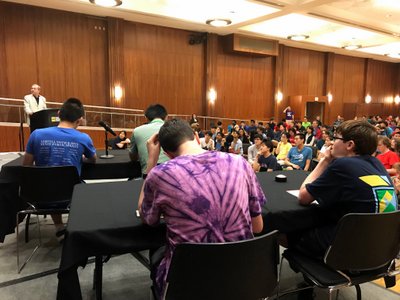 Below, the winning team members--Amy Zhou, Luke Robitaille, and Jay Leeds--talk about their victory:

Luke may look a little familiar. He also won the 2019 Who Wants to Be a Mathematician Championship this past January at the Joint Mathematics Meetings in Baltimore, and recently qualified for the U.S. International Mathematical Olympiad team.

Eight teams played that night: Chicago, Indiana, Iowa, Michigan, Missouri, Minnesota, and Texas. The contestants from those teams are pictured below 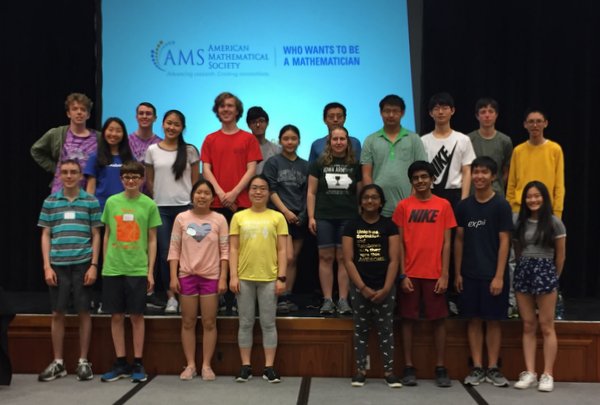 (except for the team from Minnesota which arrived after the photo was taken). (Photo by Bill Butterworth.)

Below are a slideshow of photos from the games, other photos, and short descriptions of the games. 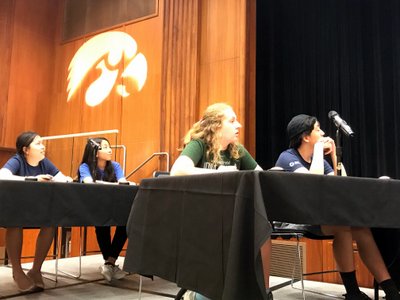 Iowa led at the halfway point, after question three, but the Texas team answered the next three questions correctly to win the game, earning each team member \$200 and a TI-Npire CX. Minnesota answered the last question correctly to edge out Missouri for second place. Lauren Korbel, front left, celebrated her birthday that day. 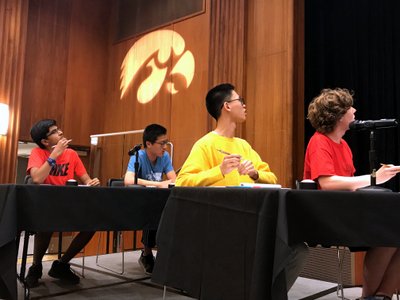 In game two, the team members from Kansas answered every question correctly, to win the same cash and prizes that the Texas team won in game one. Chicago was tied with Kansas at the halfway point and held second place until the last question, when Michigan answered correctly and Chicago didn't, which put Michigan in second place. 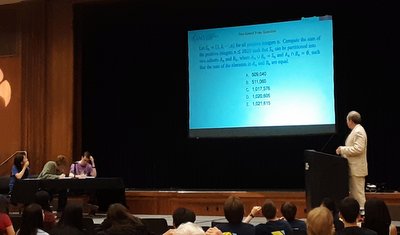 Two members each from the Texas team and the team from Kansas matched up on one question, to determine who would go to the Bonus Round. The Square-Off question was also worth an additional \$600 to the winning team members. Luke from Texas signaled in first and was correct. So he, Amy, and Jake got the chance at the Bonus Question, for which a correct answer would earn them a total of \$3,000 for the night. They were able to work together on the question. (Photo by Edward Early, Texas coach.) 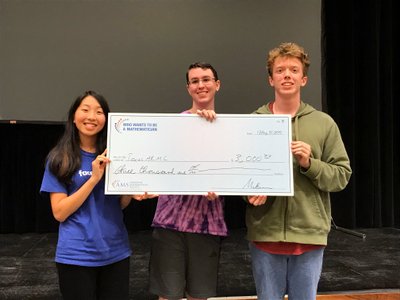 They did pretty well, answering quickly even though they had three minutes. Their first impression was correct and that correct answer brought their total winnings in the game to \$3,000.

Below is what each individual won.

Note: Michael Han and Derek Zhu may also be familiar to you because Michael was one of twelve contestants in the 2019 Championship, and Derek won \$500 in a game at the University of Michigan-Dearborn held about a month before this game.

Steve Condie, who coordinated everything at the university; and Steve Goodman who took all of the uncredited photos above.

The students, who were such a wonderful audience, exuberantly rooting for and cheering on their teammates while working on the problems themselves.

The coaches, who chose the team members and--despite the busy schedule--made sure they got to the game.

Bill Butterworth, DePaul University, Who Wants to Be a Mathematician co-creator and tech guru, and driver for the WWTBAM bus on the roundtrip from O'Hare to Iowa City.