Who Wants to be a Mathematician at the ATMNE Annual Conference 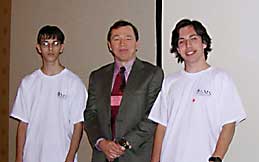 Steven Ehrlich and Joe Zimmerman each won $2000 in the AMS game Who Wants to be a Mathematician at the Association of Teachers of Mathematics in New England (ATMNE) Annual Conference in Providence, Rhode Island on October 22. Steven and Joe were two of ten contestants from Massachusetts, Rhode Island and Connecticut who competed in the game.

All contestants in the game are listed below.

The contestants were divided into two groups of five and each group played Who Wants to be a Mathematician. Each game winner had a chance to win $2000 by answering a bonus question (correctly).

Both games were very close, with the second game ending in a three-way tie between Yuanjian Li (pictured below), Matthew Tai and Joe Zimmerman. Joe advanced to the bonus question by being the first of the three to get the tie-breaking question correct. 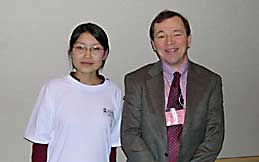 The bonus questions were very difficult, but Steven Ehrlich and Joe answered them well before the three-minute time limit had expired. Both winners were confident of their answers, as evidenced by the wonderful explanations each gave.

In addition to winning the $2000 grand prize, Steven and Joe also won copies of Maple 9.5 donated by Maplesoft. Other prizes and their winners were:

Although not all contestants won the $2000 grand prize donated by the AMS, they all delighted the audience of New England math teachers with their knowledge and explanations of their answers. Congratulations to all of them.