Who Wants to Be a Mathematician in California

Fifteen students competed in five games of Who Wants to Be a Mathematician on April 8th at Pepperdine University in Malibu, and the next day at the annual meeting of the National Council of Teachers of Mathematics (NCTM) in Anaheim. Twelve of the 15 students competed in three games at Pepperdine. The winners of those three games and three other students played at the NCTM meeting.

There were many winners in the games, but the big winner was Dustin Foley (above right, with game emcee and AMS Public Awareness Officer Mike Breen) who won $6000: $2000 at Pepperdine and $4000 in the championship game at the NCTM annual meeting.

Who Wants to Be a Mathematician at Pepperdine University

Contestants and prizes from the three games at Pepperdine are listed below.

Pictured below are Elizabeth and Justin contemplating their $2000 bonus questions. 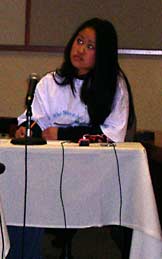 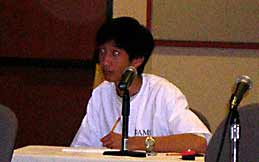 Elizabeth, a sophomore, got her bonus question right; Justin, a junior,didn't get his right but both qualified along with Dustin to play in the championship game the next day at the NCTM annual meeting. 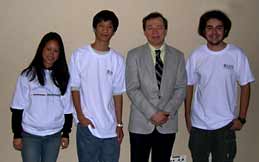 Who Wants to Be a Mathematician at the NCTM Annual Meeting

The contestants who qualified for the first game--all female--competed for a chance at the $2000 bonus question and for a slot in the championship game with Dustin, Elizabeth and Justin. The winner of that competition was Elaine Nguyen of Huntington Beach High School, who won an exciting match. She then answered her bonus question correctly to win $2000. As if Elaine's performance wasn't exciting enough, Rebecca Liu's helper provided more thrills when he raced up on stage during the game. He had arrived late and seeing an empty space on stage, which was there because one of the contestants was missing, he ran right to the empty seat and sat down. Cool as a cucumber, Rebecca subtly motioned him to the row in the audience reserved for contestant helpers, and order was restored. The three contestants in the first game, and their prizes are below.

In the championship game, which was the closing event at the meeting, Elaine, Justin, Elizabeth and Dustin delighted and amused the audience with their answers and explanations. For example, when Dustin was asked how he knew that Augustus DeMorgan was born in 1806 (as opposed to the other choices), Dustin answered that he just figured that 1806 was the most likely year for someone to name their son Augustus. Dustin also impressed the audience with his reasoning on his bonus question. Championship game participants and their winnings in the championship game, provided by the AMS, are:

After the ganes many of the teachers in attendance mentioned that even though they expected the students to be smart, they were still surprised by their outstanding performance in the game and by how engaging their personalities were. Contestants at the NCTM annual meeting are pictured below (at left) with Mike and NCTM President Cathy Seeley.

The AMS congratulates all the California contestants and their teachers and thanks Sharon Clarke and Rachel Alexander of Pepperdine University and Carol Edwards of the NCTM for arranging the games.