About the Who Wants to Be a Mathematician Championship 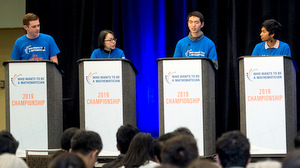 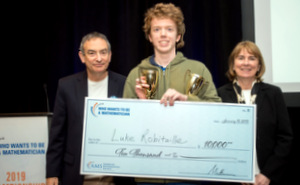 The Who Wants to Be a Mathematician Championship is an international mathematics contest for secondary school students (although younger students are welcome to participate, too) in the US, Canada, and the UK.

In the Who Wants to Be a Mathematician Championship, students from schools in nine regions in the U.S., one from nearby the host city for the annual Joint Mathematics Meetings (JMM), one from Canada, and one from the United Kingdom compete for a US\$10,000 first prize at the Joint Mathematics Meeting (JMM) in January. The 12 students qualify for the Championship by taking two rounds of tests in the fall (Round One usually starts in the second week of September, and runs a little over two weeks), most doing so online courtesy of our technology sponsor DigitalEd. Every school in the US and Canada that participates in qualifying receives a gift certificate from Art of Problem Solving. Each student who takes the test and successfully completes three online challenges receives three one-year licenses to Wolfram software from Wolfram Research.

Teachers: Register your students. Students: Point your teacher to the information page you're on now or ask them to email the AMS Public Awareness Office for more information.

Those who score 7 or above (out of 10) in Round One, qualify for the Round Two test. If fewer than 20% of students score 7 or above, then that minimal score will be adjusted so that at least the top 20% in Round One will be eligible for Round Two. The top scorers in each of the regions (often determined by tie-breakers) and Canada compete in the semifinals at the JMM (six contestants in each semifinal). (The UK representative is chosen from among the top-scoring UK students in Round Two.) The semifinal winners go on to the finals, also at the JMM. Each cash amount won by the contestants is matched by the AMS and awarded to the math department of his or her school (or for homeschooled students, to their homeschool association). So the first-place winner receives US\$5,000 as does his or her math department. The AMS pays for (reasonable) travel, food, and lodging for each contestant and one accompanying adult.

Regions for the Championship game (plus the UK): 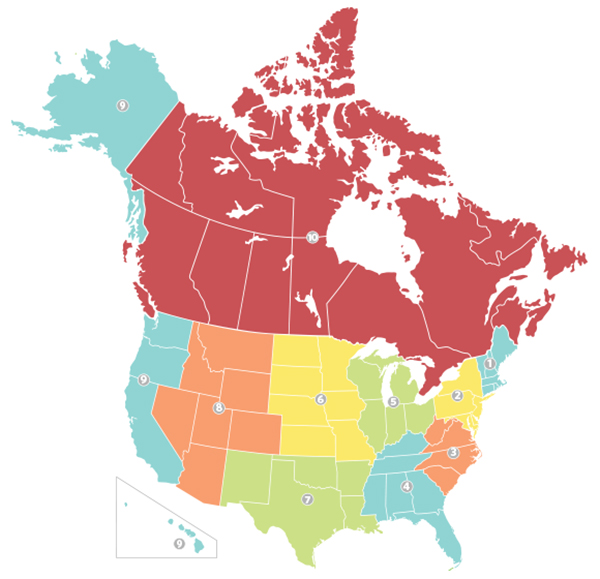 The cash prize in each game is donated by the AMS. The Good Thinking Society sponsors UK participation in the Championship game, while Maplesoft and the Pacific Institute for the Mathematical Sciences (PIMS) sponsor a student from Canada in the Championship game. Other donors are: DigitalEd--our Technology Sponsor--Art of Problem Solving--our Online Community Sponsor, Wolfram Research, Texas Instruments, and John Wiley & Sons.