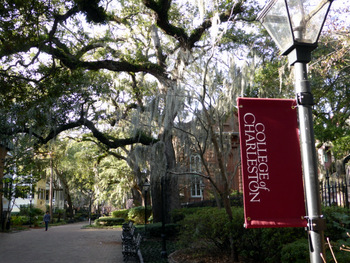 The Who Wants to Be a Mathematician crew sadly left their frozen hometowns and trudged through the snow to make their way to Charleston, South Carolina for the College of Charleston's 2014 Math Meet on February 22. The big winner in the game was David Stoner, a junior at South Aiken High School (in SC), who won $3,000 from the AMS and a TI-Nspire CX from Texas Instruments. David also had the top score on the Math Meet's written test taken earlier in the day.

Videos from the game:

Below are more details about the games that day along with more photos from the event.

Thanks very much to our sponsors: Maplesoft, the Who Wants to Be a Mathematician technology sponsor, Texas Instruments, and John Wiley and Sons. Thanks also to Alex Kasman, fellow math faculty member Brenton LeMesurier, and math major Fill Staley, who helped with arrangements and setting up.

Find out more about Who Wants to Be a Mathematician. Read more about the College of Charleston Math Meet.