Below are the ten contestants from across the country who qualified for the 2014 national Who Wants to Be a Mathematician contest, which took place on Thursday, January 16 at the Joint Mathematics Meetings in Baltimore.

The ten contestants were selected based on scores on two rounds of qualifying tests (see the test for round one and for round two) and will compete for up to US$10,000 (total) for themselves and their school's math department. Two thousand students took the first test, most of them online using Maple TA, which was provided courtesy of Maplesoft, our technology sponsor.

In addition to the cash prizes in the competition, there are also prizes donated by: Texas Instruments, Maplesoft, John Wiley & Sons, and the AMS. The game is a program of the AMS Public Awareness Office and was developed by Mike Breen (AMS Public Awareness Officer) and Bill Butterworth (DePaul University). Read about--and see video from--the 2013 contest, won by Calvin Deng. Pictured below is Allan Garry (Vista High School), who participated in the 2013 contest, along with his big rooting section and Mike. 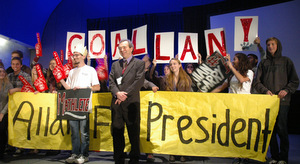