Below are the 11 contestants from across the country who have qualified for the 2015 national Who Wants to Be a Mathematician, which will take place on Monday, January 12 at the Joint Mathematics Meetings in San Antonio. If you can't be there, you can watch live (9:30-11:00 a.m. Central).

The contestants were selected based on scores on two rounds of qualifying tests (see the test for round one and for round two) and will compete for up to US$10,000 (total) for themselves and their school's math department. Most of the more than 1,500 students who took the first test, did so online using Maple TA, which was provided courtesy of Maplesoft, Who Wants to Be a Mathematician's technology sponsor.

Read about--and see video from--the 2014 contest, won by Vivek Miglani of Marjory Stoneman Douglas High School. Pictured below is Vivek with the school principal Ty Thompson and the check for $5,000 for the school's math department that Vivek earned as a result of his first-place finish. 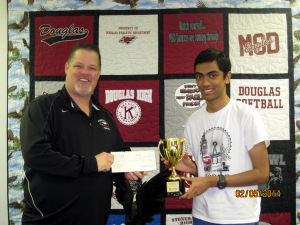