Do the Math! in Danvers, Massachusetts

On April 29, eight students from high schools north of Boston competed in the new AMS game Do the Math!. The new game, like the game Who Wants To Be A Mathematician, offers prizes to students along with the chance at a grand prize of $2000. The contestants in the two games are listed below.

The format of Do the Math! is as follows: Four student contestants accumulate points by answering multiple-choice mathematics questions. Each question has a time limit, which varies according to the question's difficulty. Contestants signal in their answers electronically, so that all four students can get a given question correct and earn points, as long as they have signaled in before time has expired. Each contestant can ask for help once from his or her teacher. The contestant with the most points at the end of the game earns a chance to answer a bonus question worth $2000.

In Danvers, two games were held, so that eight contestants got a chance to play. The two winners, Arthur Drehman and Will Chen, are pictured below with game emcee Mike Breen. 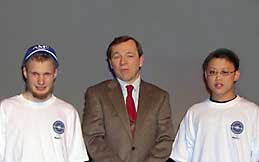 In the first game, Arthur Drehman won first place by answering all the questions correctly. Arthur, along with the other contestants in the round, did not ask for help on any of the questions. When it was time for him to answer his bonus question, he still didn't need help, answering thoughtfully and correctly to win the $2000 grand prize. Although it was a difficult question, Arthur's careful explanation showed his keen insight into the problem.

Will Chen was the winner of the second game of Do the Math!, winning Maple 9.5 from Maplesoft and a chance at the grand prize. Will also gave a good explanation of his choice on the bonus question. It was in the middle of his explanation, after he had locked in his answer and audience members had expressed their preferences among the four choices, that Will realized he had made the wrong choice and thus, unfortunately, did not win the grand prize. Nevertheless he did win the software and won an exciting game to earn the right to answer the bonus question. 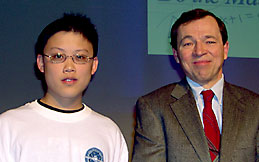 Below is a list of the prizes won by the contestants along with the sponsors who donated the prizes.

In addition, each contestant received a T-shirt from Maplesoft, an icosahedron from the Mathematical Association of America, and a cap, water bottle, and briefcase from the AMS.

The contestants provided a fun and entertaining afternoon at Danvers High School. Congratulations to them and to their teachers.