Who Wants to Be a Mathematician at Florida Atlantic University

Who Wants to Be a Mathematician was part of Florida Atlantic University's annual Math Day on March 1. The AMS game and a lecture by University of Wisconsin Solle P. and Margaret Manasse Professor of Letters and Science Ken Ono added to the excitement of the University's Math Day 2008, which brought in over 200 area students and teachers for an individual and team competition (among students).

Students began the day by taking a 25-question multiple choice test in the individual competition, which had a top prize of $1000, then many competed in a team competition. Following a post-competition lunch, Ono gave a lecture Freeman Dyson's Challenge for the Future--The Story of Ramanujan's Mock Theta Functions in which he told students and teachers about the life and work of Srinivasa Ramanujan. The challenge is understanding Ramanujan's mock theta functions, on which Ono and Kathrin Bringmann have recently published results.

After a short break, 12 students (most of whom are pictured above) competed in three games of Who Wants to Be a Mathematician.

Despite having worked hard all morning, the contestants acquitted themselves well in the three games and put on a very exciting show. 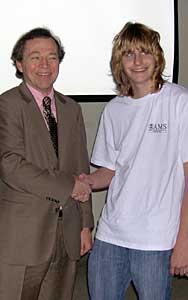 Here are the prizes won by the twelve contestants:

Following the games, FAU president Frank T. Brogan congratulated all the students on the big part they played in such a great day of mathematics. Then the day concluded with FAU College of Science Dean Gary Perry and math professor Tomas Schonbek awarding the prizes for the Math Day individual, team, and Internet competition.

The AMS thanks the FAU Department of Mathematical Sciences for hosting the event and Karen Katonah for the many arrangements she made, the NSF for its support of this event, and sponsors Texas Instruments, Maplesoft, and John Wiley and Sons, for their continued support of Who Wants to Be a Mathematician.

Photographs by Who Wants to Be a Mathematician judge and co-creator Bill Butterworth (DePaul University Department of Mathematical Sciences) and Mike Breen.