"Thanks so much for everything! The entire competition was an amazing experience that was unlike anything I've ever been a part of."

"Thanks for the award. It was used to implement WebAssign in our AP Calculus classes this year which was immensely successful and so we will probably use it for the same purpose next year."

"Thanks so much for this amazing opportunity, and our school certainly appreciates the support, too!"

Shyam was not the only winner that day. All 10 contestants, pictured below, won cash and prizes ... and plaques (read more about the contestants here).

In a first for Who Wants to Be a Mathematician, there were three runners-up in this contest: Stephen Lamontagne, Eric Schneider, and Allen Yang. Normally there is only one runner-up, but because of a typing mistake, the last question of the second semifinal that appeared on the screen was not what was intended (onscreen, the operative equation was cos(cos theta) = theta, when the equation should have been cos(cos theta) = cos theta). Eric and Allen's answer was scored as incorrect when in fact it was correct (based on the displayed question). So each of the three contestants (pictured below) won $3000 and a runner-up trophy. 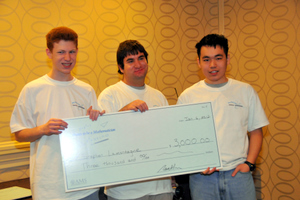 Videos of the action:

After the contest, the contestants received awards at a ceremony presided over by Ken Ono (Emory University), who has given lectures at many events involving Who Wants to Be a Mathematician. The contestants were welcomed and congratulated by AMS Executive Director Don McClure, and AMS President Eric M. Friedlander. Later the two were joined by Kenneth Ribet (Stanford University) and Edward Frenkel (University of California, Berkeley) to hand out the plaques. Following lunch, Hee Oh (Brown University) handed out trophies for first place and for the runners-up.

Here are the prizes and cash won by the contestants in Who Wants to Be a Mathematician.

In addition to those amounts, the math department at each contestant's school receives a matching amount from the AMS.

The AMS thanks sponsors Texas Instruments, Maplesoft, and John Wiley and Sons for their continued generous support of Who Wants to Be a Mathematician. Thanks also to judges Bernie Madison (University of Arkansas), Ivelisse Rubio (University of Puerto Rico-Rio Piedras), and Katherine Socha (Math for America).

The last sentence above is proof that not all good judges are male, and as noted at the contest, not all good math students or mathematicians are male. See the AMS poster "Women Doing Mathematics" (available free from the AMS Public Awareness Office) for evidence.

See coverage of the contest: Of Shyam and his victory in The Kansas City Star and on KMBC-TV, of Allen Yang in the Raleigh News & Observer, and of coverage before the contest of Raj (on WJBK, WDIV and in an article in the Detroit News), and Pablo in the Miami Herald. (Rachit and Stephen were also written about, in the Idaho Statesman and Providence Journal, respectively, but the links have expired.)