"Thanks for hosting the [Who Wants to Be a Mathematician] contest. I had a great time seeing some old friends again and also meeting other students and mathematicians. I really appreciate having the opportunity to come to San Diego to compete. I'm sure the others feel the same as well!"

"My wife and I had a wonderful time in San Diego. The banquet was nice and the AMS representatives were very friendly. Caitlin enjoyed her experience and is raring to go for next year. She's already looking forward to the qualifying test."

"I enjoyed watching the program online. Thank you again for this wonderful opportunity for students."

"Thank you so much!!! It is very generous of the AMS to hand out the monetary awards that it provides and we feel very lucky and privileged to have a student like Shyam."

Calvin Deng, a senior from the North Carolina School of Science and Mathematics, was the big winner, winning on the last question of the finals and taking home US$5,000 and a TI-Nspire CX for himself, and $5,000 for the math department at his school. Calvin edged out Shyam Narayanan of Blue Valley West High School (KS), who won in 2012. There were two other people in the finals, Eric Schneider of High Technology High School (NJ) and Alex Wang of Los Alamos High School (NM), because they tied with Calvin and Shyam, respectively, in the two semifinals.

Below is a description of the game, a few videos (shot by AMS Public Awareness Officer Annette Emerson), videos of each question (shot by Bill Butterworth), and a slideshow. View the entire game here and see links to press coverage of the contestants.

Here is Calvin after his victory:

The final round was an exciting, fast-paced match. After it was over, audience members wondered if host Mike Breen finished reading more than one of the extremely tough questions before someone signaled in and answered correctly.

And our guest introducer, who got the competition kicked off, Luke Randolph (Vista High School):

Videos with all the questions from the semifinals and finals:

Description of the game: 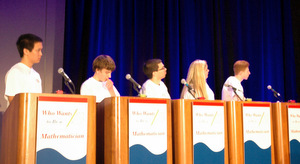 In the first semifinal, with contestants from east of the Misssissippi River, Calvin (far left) and Eric (far right) were tied for first the whole way. Both of them answered every question correctly. John (middle) was in third at the halfway point. Then Cassidy (second from left) moved into third place on question five and held onto third place throughout. Caitlin (second from right) was one of three contestants to answer the last question correctly, which moved her into fourth place. In a new approach for Who Wants to Be a Mathematician, rather than break the tie, both Calvin and Eric moved on to the finals. 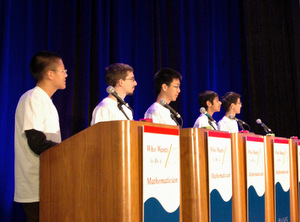 The second semifinal was a bit like the first, in that two people--Shyam (second from right) and Alex (far right)--answered every question correctly and earned places in the finals. Eugene (far left) was tied with both until the next-to-last question, an involved algebra problem, which he didn't answer correctly. He did get the last question correct, however, to hold on to third place. 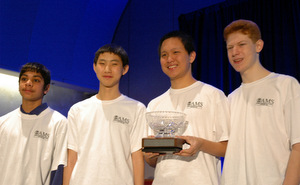 In the finals the contestant who answers correctly first gets the points, so Calvin, Shyam, Eric, and Alex had their hands on their buzzers and were raring to go. This might have been the fastest finals in Who Wants to Be a Mathematician history, as the four contestants were very quick with their answers and seldom was the question read, let alone all the choices, before one of the four answered correctly. The championship came down to the last question, which Calvin answered correctly to win the competition.

Meet the contestants who qualified for the 2013 competition.

Here are the prizes and cash won by the contestants in the 2013 national Who Wants to Be a Mathematician. For each cash prize, a matching amount is awarded to the math department of the student's school

The AMS thanks sponsors Texas Instruments, Maplesoft, and John Wiley and Sons for their continued generous support of Who Wants to Be a Mathematician. Thanks also to judges Ivelisse Rubio (University of Puerto Rico-Rio Piedras), and Ed Dunne (AMS).