It has a been a wonderful experience participating in the Joint Mathematics Meetings through the [Who Wants to Be a Mathematician] math contest. I am very grateful that you invited us here to compete. This is a great contest and it was a lot of fun. Thank you!

Thank you very much for the invitation to the national contest. My son enjoyed very much the Who Wants to Be a Mathematician contest. He met old friends and made new friends. The contestants are smart and the games are so fun.

It is great that the AMS is able to conduct this competition which values and encourages mathematical talent. While sports are usually celebrated, it is wonderful that students interested in mathematics can also be encouraged. I sincerely hope that many more students gain the opportunity to participate in this competition.

Vivek Miglani, a junior from Marjory Stoneman Douglas High School in Florida, won the 2014 national Who Wants to Be a Mathematician, taking home US$5,000 and a TI-Nspire CX for himself, and $5,000 for the math department at his school. Here's Vivek just after his victory:

Vivek was joined in the finals by Jesse Zhang of Fairview High School (CO), who took second, and Tahsin Saffat of Westview High School (OR). Jesse won $3,000 for himself and the Fairview math department, as well as a TI-Nspire CX, while Tahsin won $1,000 for himself and the Westview math department, as well as a copy of Maple 17, published by the game's technology sponsor, Maplesoft.

(The first Championsip Bowl picture and the individual photos of the contestants--except we somehow missed getting one of Clark--were taken by AMS Public Awareness Officer Annette Emerson. The remaining images were taken by Sandy Huffaker, as are the next six photos below.) 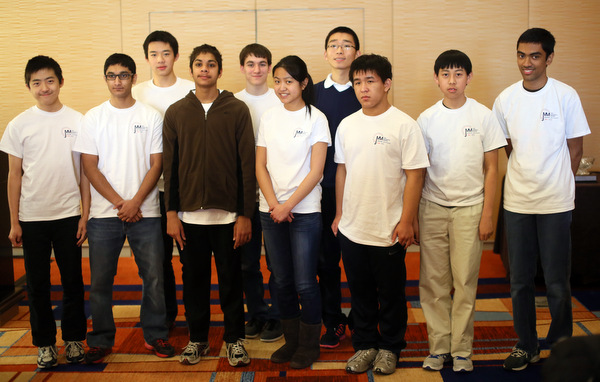 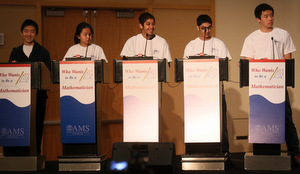 In the first semifinal, Jesse and Tahsin were tied for first at the halfway point. Patrick answered question five correctly to move into a three-way tie for the top spot, and the three remained tied after question six. Shyam, Jesse, and Tahsin answered the next question correctly which put Shyam in third and Jesse and Tahsin back into a tie by themselves for first. Four of the five contestants answered question eight correctly (a question concerning the arithmetic and geometric mean), so the positions of the contestants were unchanged and Jesse and Tahsin qualified for the finals. This semifinal featured a video by Judith Grabiner (Pitzer College), winner of the 2014 Beckenback Book Prize from the MAA, explaining some of the work and questions of David Hilbert. 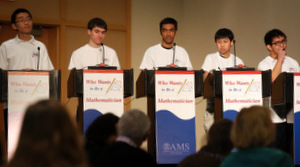 Game two, which was even tighter than game one, also featured a video, this one by Jean-Marie de Koninck (Université de Laval) about normal numbers. Sammy held the lead at the halfway point. Before that, on question three, Vivek forgot to signal in, even though he thought he had signaled in. The judges huddled and since they were convinced that he did know the answer to the question, awarded him the points. Vivek moved ahead after question five, one about matrix multiplication, which only he and Dennis answered correctly. Vivek held that lead until question seven, at which point Clark moved into first. But on the last question, Sammy and Vivek answered correctly which put Vivek in the finals.

Tim Chartier then captivated the audience with his mime performance, "The Infinite Rope." Here's video of some of his performance:

Videos of the awards ceremony:

Below is a slideshow of the post-game awards ceremony and luncheon (all but the last photo by Sandy Huffaker.)

Here are all the prizes and cash won by the contestants in the 2014 national Who Wants to Be a Mathematician. For each cash prize, a matching amount is awarded to the math department of the student's school

Thanks very much to our sponsors: Maplesoft, the Who Wants to Be a Mathematician technology sponsor, Texas Instruments, and John Wiley and Sons. Thanks also to our judges: Bill Butterworth (also Who Wants to Be a Mathematician co-creator), DePaul University, Caren Diefenderfer, Hollins University, Bernie Madison, University of Arkansas, Ivelisse Rubio, University of Puerto Rico-Rio Piedras, and Katherine Socha, Math for America; and to our performers: Tim Chartier (live), Davidson College, Judith Grabiner, Pitzer College, and Jean-Marie De Koninck, Université de Laval. Thanks as well to Thomas Dick, Oregon State University, and Carl Yerger, Davidson College, for yeoman-like work behind the scenes.

Find out more about this year's contestants, Who Wants to Be a Mathematician .