"It is great to see so many teenagers taking pride in their mathematical skills and battling against each other so brilliantly and politely. And, of course, in addition to those who made it to the final of Who Wants to Be a Mathematician, there were thousands of high school students who were brave enough to enter the completion--well done to all of them, too." Simon Singh, math and science writer and winner of the 2016 JPBM Communications Award for Expository and Popular Books, who attended the competition and gave a public lecture afterwards.

Ankan Bhattacharya won $10,000 in the 2016 national Who Wants to Be a Mathematician on January 7 at the Joint Mathematics Meetings in Seattle. Ankan, a junior at International Academy East in Michigan, astounded the audience in the finals, answering very quickly and offering wonderful explanations. Ankan will receive \$5,000 for his win. The math department at International Academy East will also receive \$5,000. Below are some videos, photos, and descriptions of the game.

Here is Ankan just after his victory:

Ten of the smartest high school mathematicians competed for $10k at the @JointMath Meetings in Seattle today #JMM16 pic.twitter.com/Fvjter7S4j

Karthik Karnik, a senior at the Massachusetts Academy of Math and Science, is the 2016 runner-up. He won $3,000 for himself and $3,000 for the academy. Ankan and Karthik were joined in the finals by Kelly Zhang of the North Carolina School of Science and Mathematics. Kelly and Karthik tied in their semifinal game, so both moved on to the finals. As you would expect, they are both pretty sharp, but because Ankan was so quick with his answers, they didn't get many chances to signal in. (Photo below of Karthik, Ankan, and Kelly in the finals, by Steve Schneider/JMM.) 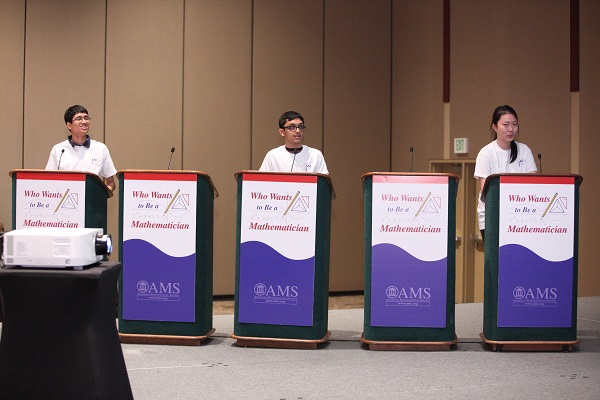 If you weren't at the game, you can still watch the webcast (not an if and only if).

Here's a slideshow of photos from the game and the lecture by Simon Singh: 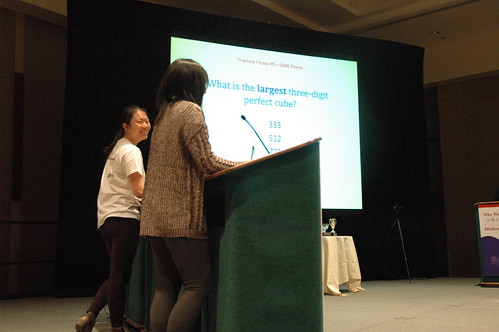 And videos of all the action:

The above 10 contestants, chosen from over 2300 students who took the qualifying tests, were split into two groups (of five) for the semifinals.

As mentioned above, Ankan was incredibly quick in the finals (in which, unlike the semifinals, only the first contestant to answer correctly receives points) and won the 2016 national championship. The audience, recovering from the blitz put on by Ankan, then watched the awards ceremony and the lecture by Simon Singh. (Photos by Steve Schneider/JMM.) 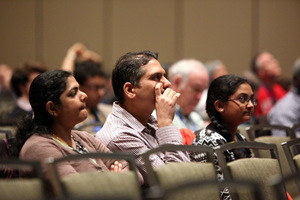 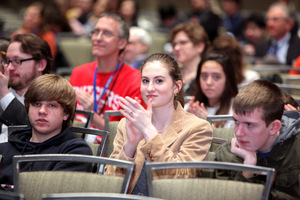 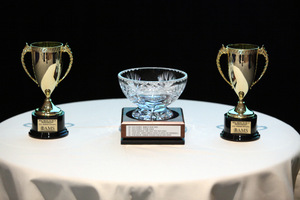 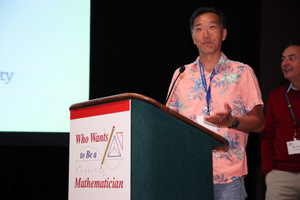 The trophies were given out to Ankan and Karthik in a ceremony hosted by Ken Ono (Emory University, above right). AMS President-elect Ken Ribet and Simon Singh gave the awards to the deserving recipients. (Photos by Steve Schneider/JMM.) 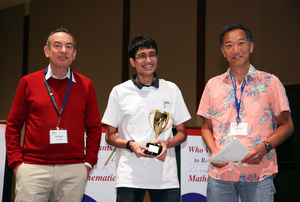 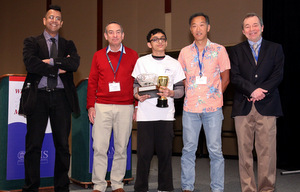 Following the lecture, the contestants gathered with their parents, and luminaries Diane Davis, Jordan Ellenberg, Ken Ono, Ken Ribet, Simon Singh, Who Wants to Be a Mathematician Technology Sponsor Maplesoft's representatives Louise Krmpotic and Heather Zunic, and Who Wants to Be a Mathematician Online Community Sponsor Art of Problem Solving's David Patrick for the awards luncheon. Here's are a couple of videos and a slideshow of photos (video by Samantha Faria; most photos by Steve Schneider/JMM, others by Annette Emerson, AMS):

Congratulations from the sponsors:

The contestants get their awards:

Photos of the awards luncheon: 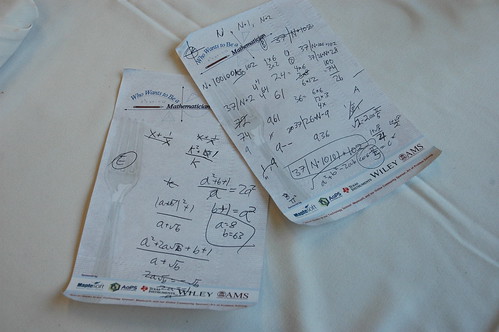 Below are the cash and prizes awarded to the 10 contestants. For each cash prize, the math department of the student's school receives a matching amount.

Below are photos of some of the math departments receiving their matching amounts.

Thanks very much to our sponsors: Maplesoft, the Who Wants to Be a Mathematician technology sponsor; Art of Problem Solving, the Online Community Sponsor; Texas Instruments and John Wiley and Sons. Thanks also to our judges: Bill Butterworth (also Who Wants to Be a Mathematician co-creator and show runner), DePaul University, Caren Diefenderfer, Hollins University, and Stephen Davis, Davidson College, and to Colin Adams of Williams College who did a video about knot theory for the game.

Find out more about this year's contestants and Who Wants to Be a Mathematician.