"Thanks again for hosting the Who Wants to be a Mathematician contest. It was great to see the contestants and the talent of the students at the high school level."

"We were all watching here from Iowa City and cheering him [Junhee Lee] on! What a great competition. Thanks for all of your enthusiasm and efforts."

"I had a great time competing, meeting the other contestants, and seeing what the overall conference was like! I look forward to trying out again next year!"

Graham O'Donnell won first place in the 2017 national Who Wants to Be a Mathematician on January 7 at the Joint Mathematics Meetings in Atlanta. Graham, a junior at Lincoln High School in Florida, will receive $5,000 and a TI-Nspire CX for his win. The Pi Mu Epsilon chapter at Lincoln will also receive $5,000.

If you weren't at the game, you can still watch the webcast. Below are videos and photos from the game and from the awards breakfast.

Here is Graham just after his victory 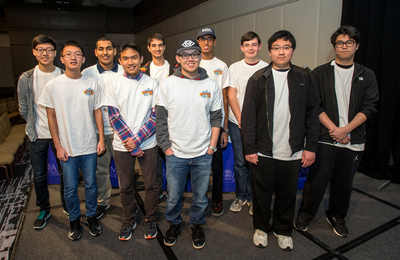 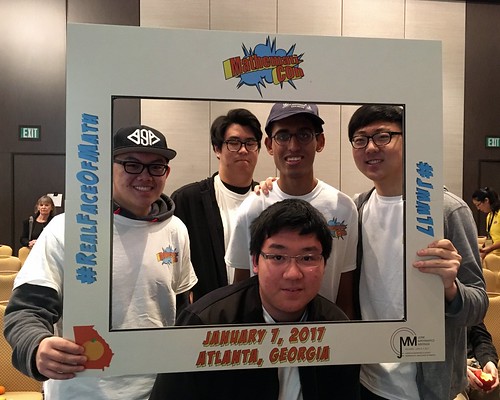 The ten contestants were split into two groups of five for the two semifinals. In game one, Shreyas, Junhee, and William were tied in the early going, but Shreyas moved ahead by being the only one to get a math history question right. He held the lead until question six when Junhee moved into first, just 100 points ahead of Andrew. That tight margin held for the last two questions as both answered correctly on questions 7 and 8. The win earned Junhee $2,000, a TI-Nspire CX, and a spot in the finals against the game two winner. 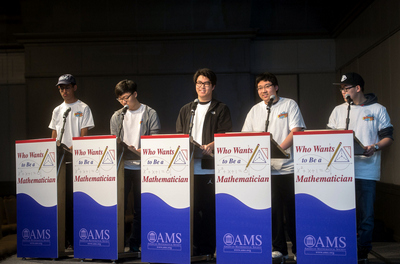 Game two had no lead changes. All five contestants answered the first two questions correctly, but Graham kept his streak of right answers going until the last question, which everyone missed. So Graham advanced to the finals against Junhee (and won the same cash and prizes that Junhee had won in the first semifinal.) 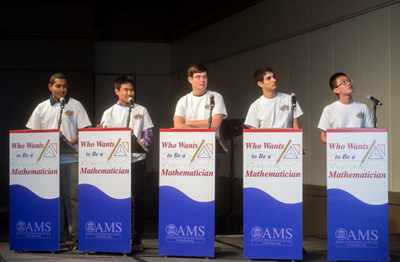 The game format changes for the finals: only the first person to answer correctly gets points. In the finals, Graham answered seven of the eight questions correctly, while Junhee answered first correctly once, so Graham was the winner of the 2017 National Who Wants to Be a Mathematician. 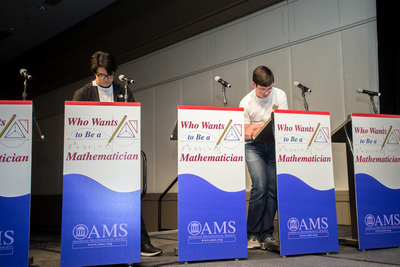 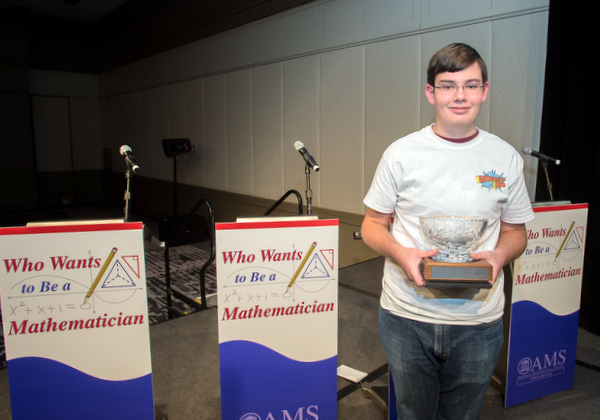 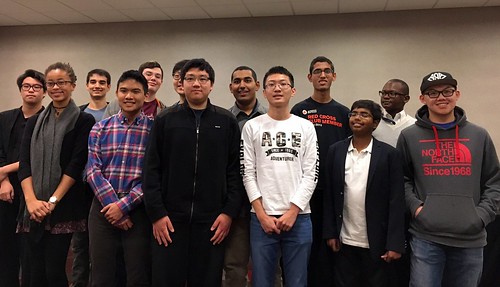 Below are the cash and prizes awarded to the 10 contestants. For each cash prize, the math department of the student's school, or a math organization at the school, receives a matching amount.

Thanks very much to our sponsors: Maplesoft, the Who Wants to Be a Mathematician Technology Sponsor; Art of Problem Solving, the Online Community Sponsor; Texas Instruments, and John Wiley and Sons. Thanks also to our judges: Bill Butterworth (also Who Wants to Be a Mathematician co-creator and show runner), DePaul University, Stephen Davis, Davidson College, and Katherine Socha, the Park School of Baltimore. Thanks also to stand-up mathematician Matt Parker who did a very entertaining video about twin primes for the game.

Math departments/clubs get their checks

Graham O'Donnell gets his check 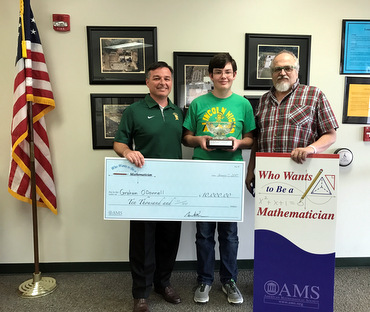 William Luo at a meeting of the Lynbrook math club 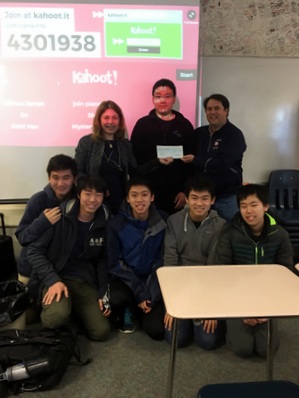 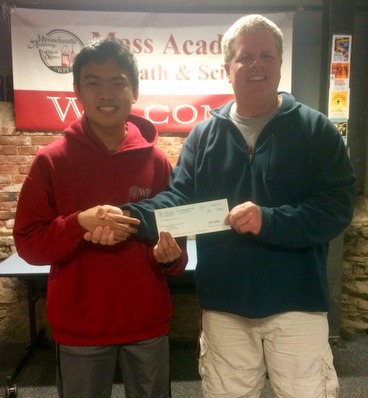 As exciting as the national game was, the lead-up to it may have offered even more drama 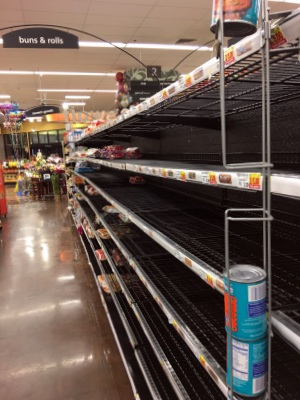 Snow and ice were forecast for Atlanta from Friday night to late Saturday morning, which caused many flights to be cancelled or rescheduled, and caused many Atlanta residents to stay home (once they had bought bread). Fortunately, the reality didn't match the forecast and all the contestants were able to make it to Atlanta for the game. For one contestant, though, Andrew Hwang, it wasn't easy. He and his family live near Chicago and their Friday flight was cancelled, so they drove, starting Friday morning and arriving in Atlanta after midnight. Although it's early in the year, this effort should earn Andrew's parents the Who Wants to Be a Mathematician MVP (Most Valuable Parents) Award for 2017.