"I watched the entire program on Saturday. We are very proud of Brian. It was a great contest. The young boy who won was quite impressive. Thank you for the generous award."

Samuel Goodman, an eighth grader at Hyde Park Middle School, won the 2018 Who Wants to Be a Mathematician Championship on January 13 at the Joint Mathematics Meetings in San Diego. Samuel received $5,000 and a TI-Nspire CX for his win. The math department at his school also received $5,000. It was a game of firsts: First championship with international contestants (Canada and the UK), and first with eighth graders (in addition to Samuel, Andrew Lee was an eighth-grade contestant). The championship was part of Mathemati-Con, which featured talks and activities for the general public and mathematicians.

Meet the contestants; view all the introductions, questions,and answers; see the archived webcast (which includes everything from beginning to end); see descriptions and photos of the game action, photos of the award presentations, as well as photos and videos from the earlier awards breakfast, which includes presentations by game sponsors and by AMS President Kenneth Ribet.

"We had a great time and it was very thoughtful of the AMS to have a live feed so grandparents and families from all over the world were able to participate. My parents watched all the way from Brazil." 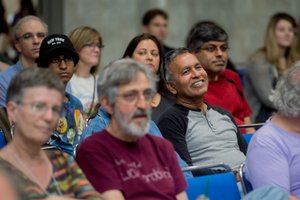 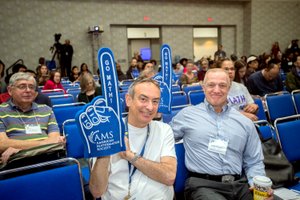 Audience members, including AMS President Kenneth A. Ribet and AMS Past President Robert Bryant (above), were welcomed to San Diego by contestant Anlin Zhang (below). 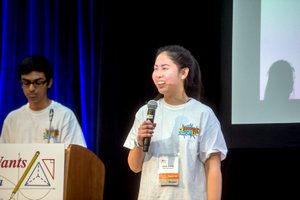 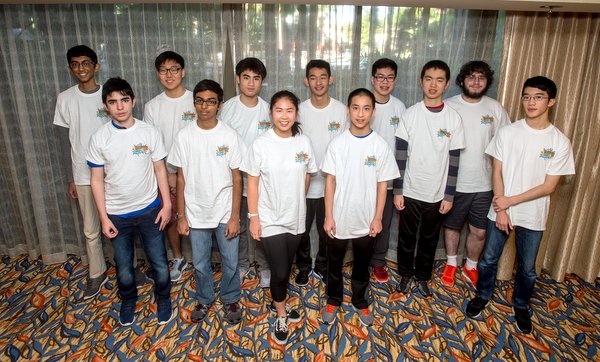 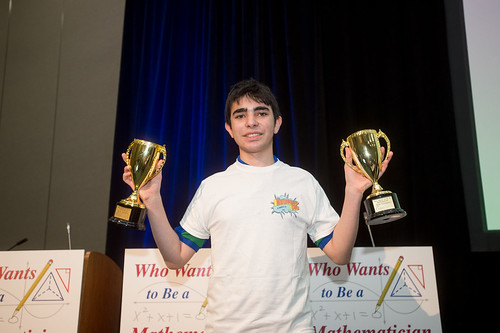 "This was my first chance to see the Who Wants to Be a Mathematician contest in person -- it was fun!" 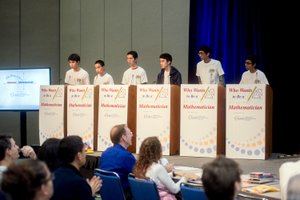 The twelve contestants were split into two groups of six for the two semifinals. In the first semifinal, Brian answered every question correctly which earned him $2,000, a TI-Nspire CX, and a spot in the finals against the winner of the second semifinal. Andrew got off to a slow start, missing questions two and three, but answered the rest of the questions correctly to finish second. Yuji and Howard only missed question six, which put them in a tie for third, just 100 points behind Andrew. 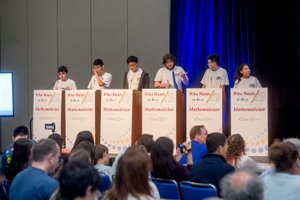 In game two, Andrew and Justin were tied for the lead early in the game. Justin took over first place at the halfway point, after question four, but Samuel became the leader on the next question, which Justin missed, and maintained the lead for the rest of the game. Samuel missed only question two in this game, while Justin answered all but question five correctly to finish in second place. Matthew wound up in third place. 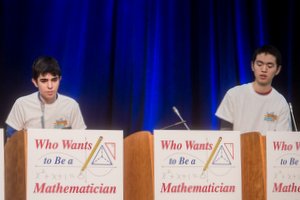 In the finals, only the first person to answer correctly gets points, in contrast to the semifinals, in which any number of contestants can receive points for answering correctly. Brian took the early lead, but Samuel answered correctly on four of the last five questions (neither contestant answered question seven correctly) to win the championship.

AMS Executive Director Catherine Roberts (below, left) presided over the awards ceremony and was joined by Congressman Jerry McNerney (below right, at the lectern), who has a PhD in math and represents California's ninth district, AMS President Kenneth Ribet, and AMS Past President Robert Bryant. The group handed out the first- and second-place trophies to Samuel and Brian, respectively, and presented certificates from Maplesoft to the Maple 2017 winners, Andrew and Justin. 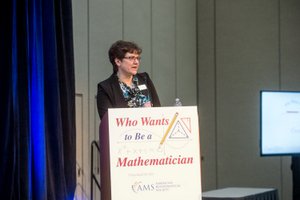 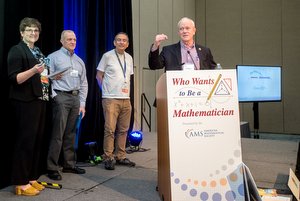 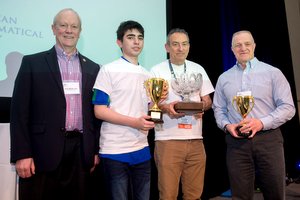 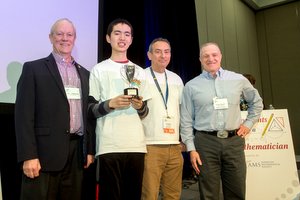 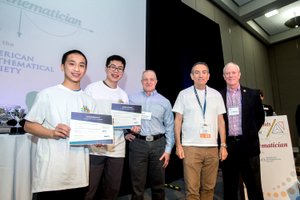 Before the game, the contestants and their families gathered with AMS President Kenneth Ribet (University of California, Berkeley), former AMS President George Andrews (Penn State University), 2018 Porter Lecturer Moon Duchin (Tufts University), AMS Colloquium Lecturer Avi Wigderson, Institute for Advanced Study, the Who Wants to Be a Mathematician staff, and representatives of game sponsors Maplesoft and Art of Problem Solving for a breakfast and awards ceremony, hosted by Ken Ono (Emory University). Below are videos and photos from the breakfast.

(Note: In the last video, Samuel Goodman is the first contestant introduced.) 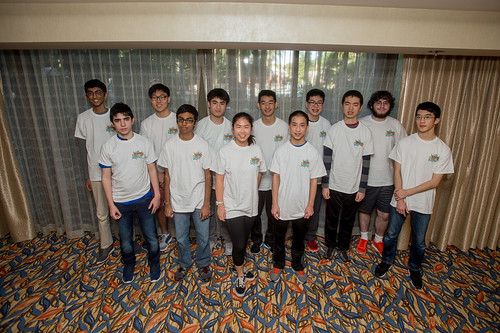 Below are the cash and prizes awarded to the 12 contestants. For each cash prize, the math department of the student's school, or a math organization at the school, receives a matching amount.

Note: Howard and Yuji tied for third in the first semifinal, so they split the cash associated with the two places, and mutually agreed on which book prizes they'd receive.

"Thank you for making WWTBAM such an enjoyable experience. I loved getting to know the other contestants and solving math problems."

Post-game photos of schools getting their checks: 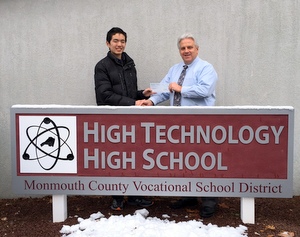 Simon Singh and Michael Marshall at The Good Thinking Society, who made participation by the students and teachers in the UK possible

AMS staffers: Anita Benjamin, Annette Emerson, Samantha Faria, John Kelly, Gerry Loon, Don Luther, Robin Marek, and Tongtong Wang, for helping that day. Samantha took all of the videos except those from the webcast, and directed the webcast.

Qualifying for the 2019 competition, which will take place at the Joint Mathematics Meetings in Baltimore next January, begins in early September (of 2018). Teachers who would like their students to participate should email the AMS Public Awareness Office (at any time) at: paoffice at ams dot org, subject line: 2019 WWTBAM. Include your name, school, and courses taught this semester. Students can either ask their teachers to email us or email us their teacher's contact information. Note: Naturally, we'd like to have more participants overall, but we'd especially like to have more young women participate and qualify.