Who Wants to be a Mathematician in Marietta, Georgia 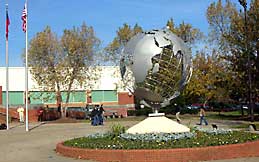 Markov Chains and Osmosis, or Homer Dreams of Getting Smarter by Steve Edwards

A Markov chain is a sequence of values (associated with different times) that depend only on the value at the immediately previous time. The Homer in this case is Homer Simpson. Edwards introduced his topic with a slide of Homer sleeping on a calculus book in hopes that facts in the book could travel into his brain through osmosis. As most calculus students (and teachers) know, this technique doesn't work, but that wasn't the end of Homer or osmosis in the talk.

Edwards talked about Marge Simpson and Homer playing poker, and assigned Marge a 0.6 chance of winning a hand and Homer a 0.4 chance. Given that both players start with two dollars and play for one dollar, it is fairly easy to calculate the chance that Homer would have three, two or one dollars after one hand, but what are the chances for various dollar amounts after two hands or twenty? And what is the long-term trend in each player's winnings? (The games end if either player has no money.)

Edwards showed how a transition matrix answers these questions. He defined a 5 x 5 matrix, whose rows are indexed by Homer's cash holdings (zero through four dollars possible) at the beginning of a hand and whose columns are indexed by his cash after the hand. The entry in the ith row and jth column is the probability that Homer had  i -1  dollars at the beginning of the hand and  j -1  dollars at the end of the hand. Raising the matrix to the nth power determines the probabilities after  n  hands. Taking the limit of the nth power as n goes to infinity shows the long-term trend in the game. Edwards also pointed out that if players start with different amounts of money, then the chance that the player with less money goes broke increases dramatically with the size of the larger bank: a good lesson for players whose "bank" is never as large as that of the casinos.

Who Wants to be a Mathematician 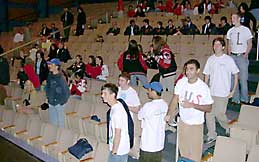 After a short break with snacks and beverages furnished by the SPSU Mathematics Department, the following students played Who Wants to be a Mathematician.

Both games were very close. In the first game, Dragos Ilas answered all the questions correctly to earn a chance at the bonus question. During his bonus question, he used a lifeline available to him and asked one of his classmates for help. Both Dragos and the classmate agreed on their choice, which was the right answer. After Dragos' win, his Walton classmates formed a victory arch for him and chanted his name as he walked through. 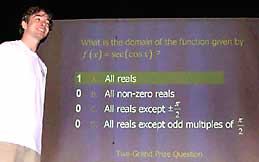 In the second game, Livia Zarnescu won on the last question to get to the bonus question. She had used her "Help" on an earlier question, so had to solve the bonus question on her own. That didn't appear to present too much of a problem for Livia as she reasoned through her bonus question very carefully and made the right choice. 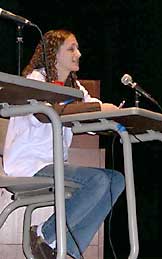 In addition to the $2000 that each received from the AMS, both Dragos and Livia qualified for the Tournament of Champions game at the Joint Mathematics Meetings in Atlanta on January 6. Contestants in that game can win as much as $4000.

Thanks to the teachers of the contestants for their participation and to the SPSU Mathematics Department for hosting the game, particularly Meighan Dillon who helped arrange the event. Congratulations to Livia and Dragos on their victories and to all the contestants, who had to pass a tough qualifying test just to play the game. Prizes won by the contestants are below.

Photos by Bill Butterworth of DePaul University and Sandy Frost of the AMS.