Who Wants to Be a Mathematician at Meditech in Canton, MA

Nam Pham, a junior at Canton High School, won \$1,000 playing Who Wants to Be a Mathematician at Meditech's facility in Canton, Massachusetts on November 21. Nam's victory followed an inspiring talk about Srinivasa Ramanujan by Ken Ono, AMS vice president and Thomas Jefferson Professor of Mathematics at the University of Virginia.

Here's Nam just after his victory.

It was a marvelous morning of mathematics at Meditech, attended by 130 students, teachers, and Meditech employees. Below are photos, a slideshow and short descriptions of the talk and game. 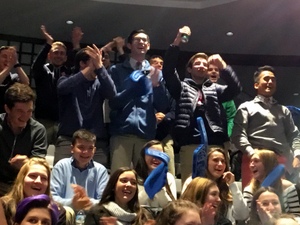 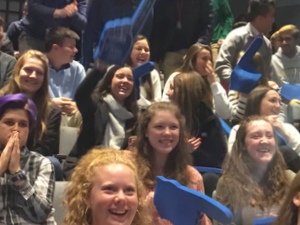 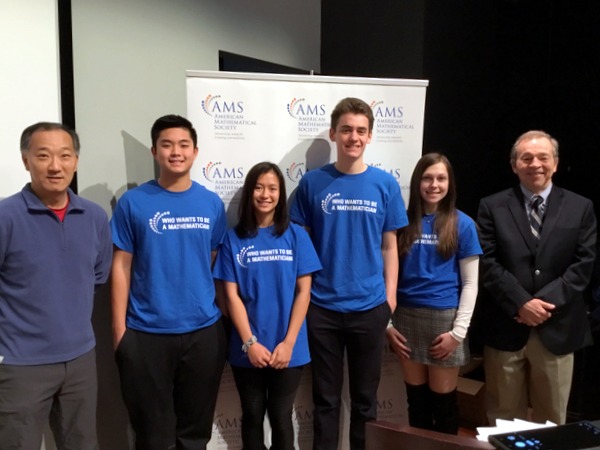 "Why does Ramanujan, 'The Man Who Knew Infinity," matter?", Ken Ono

Ono gave a delightful lecture, offering an overview of Ramanujan's life and work, and explaining the relevance of Ramanujan (1887-1920) to his own life and to the lives of audience members. He also related some of his experiences behind the scenes of the film about Ramanujan's life, The Man Who Knew Infinity, as the film's associate producer and mathematics consultant. The film, available on Netflix, stars Dev Patel as Ramanujan and Jeremy Irons as G. H. Hardy. 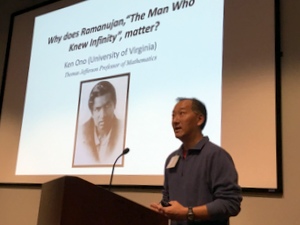 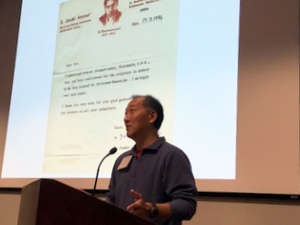 On the slide on the right is a 1984 letter from Ramanujan's widow to Ono's father, Takashi Ono, thanking him for his contribution to a fund to create a sculpture of her late husband. It's a letter that profoundly affected Ono as a teenager and still moves him to this day.

Near the end of his lecture, Ono told a story of an engineer who needed functions with certain properties to solve a signal processing problem involving cell phones. Those functions were found in Ramanujan's notebooks, written long before cell phones existed. Ono noted that people are still discovering things in Ramanujan's notebooks, almost a century after his death. 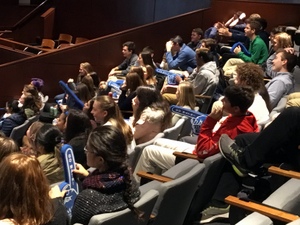 The audience warming up for the game:

Slideshow from the game: 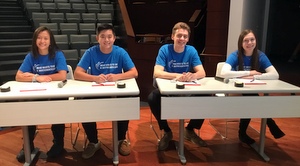 The four contestants answered 10 multiple-choice questions for the first prize of \$1,000, a TI-Nspire CX, and a chance at the \$2,000 Bonus Question. The contestants were tied after the first two questions, then there was a three-way tie among Rachel, Pham, and Donald that lasted through question six. Pham and Donald stayed tied through the next two questions, and Pham broke the tie by getting question nine correct. No one answered the last question correctly, so Pham won first place, followed by Donald, Rachel, and Sara. 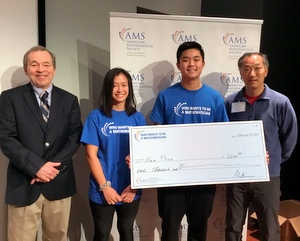 Pham was unable to answer the Bonus Question, which involved complex numbers and algebra, correctly, but he did win \$1,000 and the TI graphing calculator. He was a little disappointed not to answer the big money question correctly, but, as you can see, he was overall quite happy with his performance.

Nathalie Treveault, Meditech, who coordinated everything, including the refreshments that were served between the talk and the game. Thanks also to the Meditech crew for the wonderful facility, hospitality, and superb AV for the talk and game.

The students and teachers from Foxborough, Canton, and Milton, who were such a great audience, exuberantly rooting for and cheering on the contestants.