Who Wants to Be a Mathematician at the National Math Festival

"We really do appreciate having our students be able to compete in WWTBAM! They love it!"

"The festival was outstanding!"

Erica Lin, a sophomore at Richard Montgomery High School, won $3,000 playing Who Wants to Be a Mathematician at the first National Math Festival in Washington, DC on April 18. Here's Erica just after the game:

Erica won a wild game in which 100 points separated the top four (of six) contestants at the end. 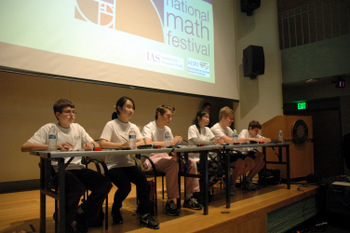 Here's a video of much of the action, as well as a slideshow of photos from the game and festival. A description of the game follows the slideshow.


This was a very smart group of contestants. After question four, the halfway point, five of the contestants had answered each question correctly. Kyle, Stefan, and Jack answered number five correctly, which moved them into a three-way tie for first place. Then Cynthia and Erica were the only two contestants to answer question six correctly, so they took over first. Five of the contestants were right on question seven and four on question eight. Both Erica and Cynthia were in those two groups, which meant they were tied for first at the end of the game.

On the tie-breaking question, Erica signaled in first and was correct. This earned her \$1,000, a TI-Nspire CX, and a chance at the \$2,000 Bonus Question.

Erica used up almost all of her allotted three minutes before signaling in. When the audience was polled about its preference, one person noted that the diagram for the question wasn't complete, which made the question ambiguous. Fortunately, Erica figured out what the diagram was supposed to be and answered correctly to bring her total cash winnings to $3,000. Unfortunately, there's no extra cash awarded for ESP skills. 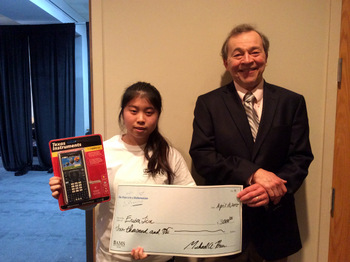 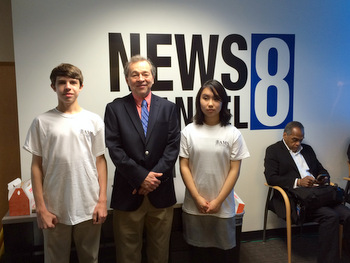 The previous day, Cynthia and Kyle appeared with AMS Public Awareness Officer and Who Wants to Be a Mathematician host Mike Breen on the local news/talk show Let's Talk Live on Newschannel 8 to promote the game and the festival. Cynthia and Kyle chatted with co-host Melanie Hastings about the courses they're taking now (differential equations--as a junior--and BC calculus--as a freshman--respectively) and their preparation for the game.

Thanks very much to our sponsors: Maplesoft, the Who Wants to Be a Mathematician technology sponsor, Texas Instruments, and John Wiley and Sons.

Find out more about Who Wants to Be a Mathematician and the National Math Festival.