Who Wants to Be a Mathematician on Pi Day 2013

Joseph Zurier, a sophomore at Classical High School, won $3,000 from the AMS and a TI-Nspire CX from Texas Instruments playing Who Wants to Be a Mathematician at Providence College on Pi Day. Joseph and his fellow contestants played before the largest crowd ever assembled for Who Wants to Be a Mathematician in Rhode Island, a little over 250 people. Below is a video taken of Joseph just after his victory, along with videos of many of the questions from both rounds. Also see a slideshow from that day and a description of the games.

Description of the games:

"My students were so excited to be a part of it. We all really enjoyed the day."

"Thanks to you and AMS for putting on another great game show. I can tell that the audience, which probably includes kids who say they don't do math, really gets into it. If they aren't trying the problems at least they can tell how challenging it is for the contestants and they seem genuinely awed by the spectacle."

"Thanks for the fun day and Andrea had a great time. Yes those bananas are quite the bunch."

"We had such a wonderful time - thank you for all that you did to make the day so much fun for the kids. Ben had a great time! I hope to see you again next year!!" 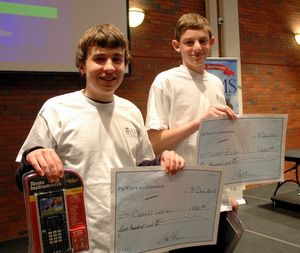 Below are the prizes won by the contestants (Dan and Benjamin settled their tie by opting for different prizes):

Joseph's victory was covered in the April 8 edition of The Providence Journal (but no online version seems to exist). Articles about James Chow and Cassidy Laidlaw were published in the Valley Breeze (page 7) and East Bay RI, respectively.

Thanks to Lynne DeMasi, Frank Ford, and Jeff Hoag of the Providence College Department of Mathematics and Computer Science for making all the arrangments for the event; and to the teachers and students who made up our biggest Rhode Island audience ever! (Thanks also to the Providence College crew who set up all the chairs.) The AMS also thanks sponsors Texas Instruments, Maplesoft, and John Wiley and Sons for supporting Who Wants to Be a Mathematician.