Daniel Sheinberg, a junior at Barrington High School, won $3,000 playing Who Wants to Be a Mathematician at Providence College on Pi Day. Here's Daniel just after his victory.

More videos are below. 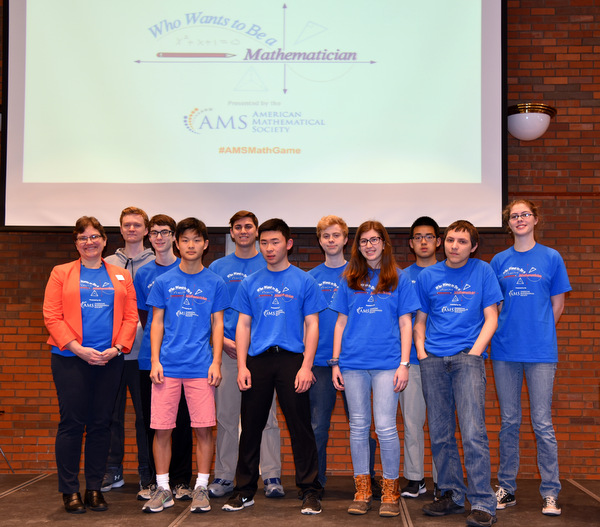 Frank Ford, from the Providence College Department of Mathematics and Computer Science, and Catherine Roberts, executive director of the AMS, welcomed the students and the crowd, which was a little smaller than it might have been because of a winter storm the day before which on Pi Day caused some schools to cancel or start late.

Videos of the action, starting with Frank Ford's welcome of the contestants and schools. 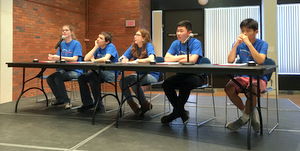 At the halfway point of game one, Justin held a narrow lead over Reese and Alli, who were tied for second. Justin held his lead until the last question which Eric answered correctly to win the game. Finishing first earned Eric $500 from the AMS, a TI-Nspire graphing calculator from Texas Instruments, and a spot in the Square-Off Round against the eventual game two winner. This is probably a good time to mention that Mary Breen, who finished in fourth place, just behind Reese, is no relation to game host Mike Breen.

Game two was also a very close match. Timothy, Thomas, and Daniel were tied for first at the halfway point, with all five contestants only 200 points apart. No one answered question five correctly and after question six, Timothy and Daniel moved into a two-way tie for first, 100 points ahead of John, who was 100 points ahead of Connor. All the contestants answered question seven correctly and the tie for first was resolved when Daniel answered the last question correctly but Timothy didn't, which put Daniel into the Square-Off Round. The 200-point gap between first and third remained at the end of the game. 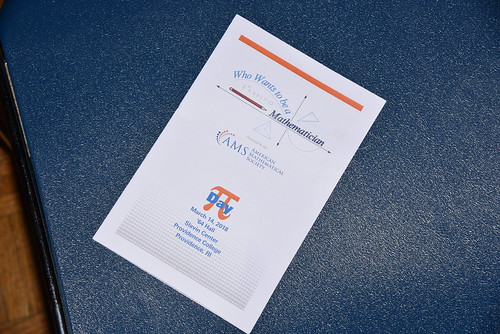 Frank Ford and Lynne DeMasi of Providence College, who coordinated everything at PC.

The students, teachers, parents, and bus drivers who braved the elements to attend and cheer on the contestants.

Bill Butterworth (Who Wants to Be a Mathematician co-creator and tech guru), DePaul University, who managed to get to Rhode Island from Chicago without the use of a sled dog.