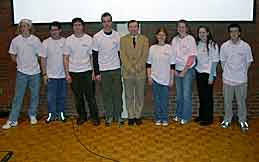 On Pi Day (3-14) 2005, eight Rhode Island students competed in two games of Who Wants to Be a Mathematician at Providence College, and it came down to one bonus question for $2000 for William Shore, a junior at Rocky Hill School in East Greenwich, RI. 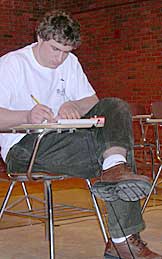 William had just won a very exciting and closely contested game of Who Wants to Be a Mathematician to earn the chance at the bonus question. Presented with the question, he thought for about two minutes, entered an answer, then changed his mind and switched his answer with about 15 seconds remaining in his allotted time. Before the correct answer was revealed, William explained his thought process to the audience and what had caused him to change his answer. It was a good thing that William did change, because his final answer was the correct one, netting him the bonus prize of $2000.

William's dramatic finale was the culmination of the two games. The contestants and the prizes they won are below.

Winners of the two games along with emcee and AMS Public Awareness Officer Mike Breen are pictured below. Miriam Klein answered all the questions in the first game correctly, but missed the bonus question. Alexander Marcus, who tied with Ben Gaines for second place, was competing in Who Wants to Be a Mathematician for the fifth straight year (he first qualified as an eighth grader). Alexander and Ben competed in a tie-breaker, which Alexander won, thus earning him second place in the second game. 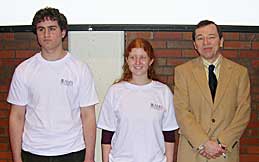 A large and enthusiastic crowd of about 150 students, teachers, and AMS staff turned out to see the games. Also attending were Providence Journal reporter Gina Macris and photographer Gretchen Ertl who covered the games for the paper. Macris talked with each contestant after the games and got some nice quotes for her article.

The AMS thanks Frank Ford, chair of the Providence College Department of Mathematics and Computer Science, and Lynne DeMasi for coordinating the logistics for the event, and congratulates all the students and teachers who participated.

Photographs by Bill Butterworth of DePaul University and Sandy Frost of the AMS.