"Thanks for providing this opportunity to the high school students of RI. As I talk to friends and colleagues from other schools and districts, I will most certainly tell them what a great event it is. Thanks again for your hard work."

"We had a blast. Thanks so much for everything. Hope to see you again next year."

"Thanks to you and your crew for putting it on again, Mike. We always love the event."

Joseph Futoma, a sophomore at Portsmouth High School, won $3000 playing Who Wants to Be a Mathematician at Providence College on April 3. Joseph won the $3000 by winning the first of two games that day, then winning the $1000 square-off round against the game two winner Semih Aydinli, of Classical High School, and then correctly answering the $2000 bonus question.

The eight Rhode Island high school contestants who played that day are pictured below with Who Wants to Be a Mathematician host and AMS Public Awareness Officer Mike Breen.

The contestants' teachers brought a lot of their students to Providence College to cheer for their classmates. Whether it was because of the buzz associated with Mathematics Awareness Month, or because the auditorium--'64 Hall-- is associated with a number that's both a perfect square and a perfect cube (and, coincidentally, the result of raising the game date's month number to the power of the day number), the crowd was quite enthusiastic and made for a very exciting morning.

The audience before the game. LaSalle's contingent is pictured above, right.

Joseph and Semih each earned $500 for their respective victories and went head-to-head (not literally) in the Square-Off Round. In this round, the first person to answer the question correctly would win another $500 and a chance at the $2000 bonus question. Joseph signaled in first, but his choice was not one of the five options displayed on the screen. Semi then chose one of those five, but it was also incorrect. Then Joseph answered correctly to advance to the bonus round.

Semih was a prime example of "playing injured," as his foot was in a cast. Probably answering questions was easy for him compared to getting on and off the stage. 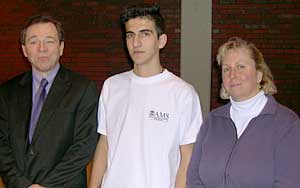 On the bonus question, the Two Grand Prize question, Joseph thought very carefully before making his choice. Once time was up, the audience was polled for its preference among the four choices. The audience and Joseph both preferred what turned out to be the correct choice, so Joseph--but not the audience--earned another $2000. 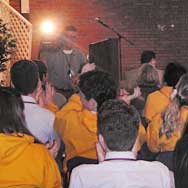 In this case, the white light is from Providence Channel 10, WJAR-TV,
which aired a segment about the game on its 6:00 newscast.

The AMS thanks sponsors Texas Instruments, Maplesoft, and John Wiley and Sons for their continued generous support of Who Wants to Be a Mathematician; and Frank Ford and Lynne DeMasi of the Providence College Department of Mathematics and Computer Science for hosting the event and making all the arrangements for it. We'd also like to thank the teachers and students who participated in this fun morning of mathematics and were a big part of that fun.

Photographs by Who Wants to Be a Mathematician judge and co-creator Bill Butterworth (DePaul University Department of Mathematical Sciences) and by Sandy Frost (managing editor of the Notices).