"Once again you put on a great show. WWTBAM is hands down the best math competition around."

"We had a great time as we always do. The kids said that it was the best field trip ever."

"Thanks for providing this wonderful opportunity. Hope to attend again next year."

"We really had a good time. It was a good feeling to be around all of the mathematical enthusiasm."

Seth Neel, a junior at The Wheeler School, won $3000 from the AMS and a TI-Nspire graphing calculator from Texas Instruments playing Who Wants to Be a Mathematician at Providence College on April 6. Below are pictures and a description of the contest, and a slideshow. The event was held as part of Mathematics Awareness Month, whose theme this year is "Mathematics and Sports." 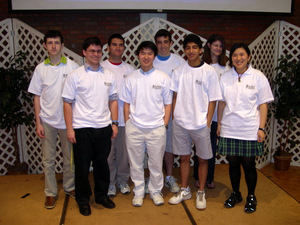 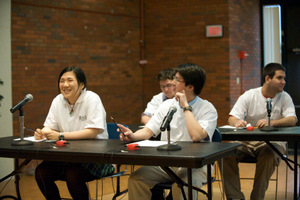 Game one was a battle between Mike Desmarais and Stephen Lamontagne, which Stephen won. Mike and Stephen each missed only one question; all four contestants answered the last question correctly. In game two, Seth Neel and Parker Kuklinski also missed only one question, but Parker's only miss was on a question worth more than the one Seth missed, so Seth won. Both games had a bit of a reunion feel to them as three of the "helpers" were former contestants in previous Who Wants to Be a Mathematician contests held in Rhode Island: Joseph Futoma of Portsmouth (2008), Alexander Kithes of Woonsocket (2009), and Xiaotian Wu of Rocky Hill (2009). (Photo by Terry Coes) 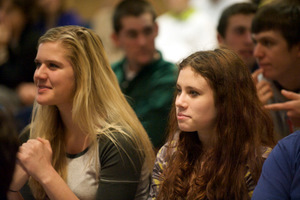 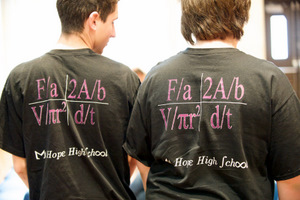 (Photos above by Terry Coes)

As a result of winning their games, Stephen and Seth each had $500 from the AMS and a TI-Nspire from Texas Instruments. The two contestants then went head-to-head on the Square-Off question for another $500 and a chance at the $2000 Bonus question. 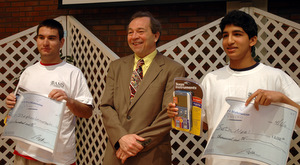 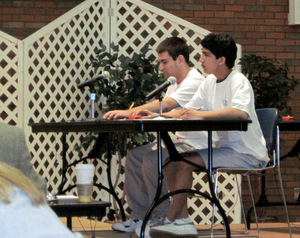 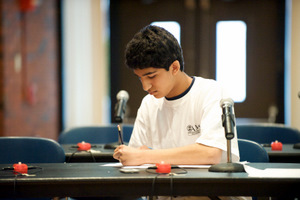 (Photo above right by Terry Coes)

Both contestants missed the first Square-Off question, which involved the Pigeonhole Principle, but on the second question, about numbers, Seth was the first to answer correctly, so he earned a chance at the Bonus question. He took all his time on this question, which also involved numbers, and answered correctly to win the $2000, and a total of $3000. The prizes won by all the contestants are:

Thanks to the sponsors Texas Instruments, Maplesoft, and John Wiley and Sons, for their continued support of Who Wants to Be a Mathematician. Thanks also to Frank Ford and Lynne DeMasi, of the Providence College Department of Mathematics and Computer Science, for making all the arrangements for the contest, and to Mother Nature for (finally) delivering sunny skies.

Uncredited photographs by Who Wants to Be a Mathematician judge and co-creator Bill Butterworth (DePaul University Department of Mathematical Sciences), AMS Public Awareness Officer Annette Emerson, and Managing Editor of the "Notices of the AMS" Sandy Frost Breen.