Photos from the game and a brief description are below, as is a slideshow (photos courtesy of SACNAS and AMS Public Awareness Officer Annette Emerson.)

University of Puerto Rico-Rio Piedras math professor Ivelisse Rubio officially woke everyone up and introduced the game, pointing out that the AMS has supported SACNAS for many of the latter society's 40 years.

The helpers then positioned themselves at a (non-commutative) ringside table and the contestants took center stage in front of the audience. 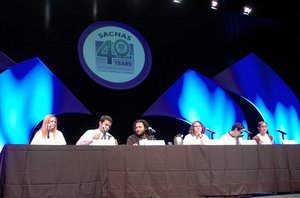 The six undergraduates (above) who played that morning are (left to right):

The wildness came from the closeness of the game, with four of the six contestants being in the lead at some point. About halfway through, Sherilyn was in first, then Francis led after answering question five--a trig question--correctly. Krista and Jeremy were both correct on question six, which put them in a tie for first. At that point, with three questions to go, 600 points separated the six contestants. Jeremy answered the next two questions correctly to move into first place and maintain a 200-point lead over Sherilyn. No one answered the last question correctly, so Jeremy won $500 and a TI-Nspire CX, and advanced to the Bonus Round for a chance to win an additional $2000.

The question in the Bonus Round was about combinatorics. Jeremy worked on the question for almost the entire three minutes and changed his answer during that time. It was a good thing he did, because his final answer was correct, which earned him his $2500 total. 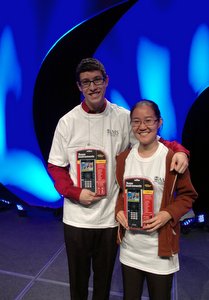 The AMS thanks sponsors Texas Instruments, Maplesoft, and John Wiley and Sons for supporting Who Wants to Be a Mathematician. We'd also like to thank Ivelisse Rubio (University of Puerto Rico-Rio Piedras), Ricardo Cortez (Tulane University), and Jenny Kurzweil (SACNAS) for their help arranging the event.