"Thanks for making this such a fun event. Our principal attended as well, and he thought it was great.

"I just wanted to say thank you so much for the game. All of my students had so much fun going and supporting Hansen in the process."

"As a math teacher, I thought the format and questions were excellent. You did a nice job of hosting this event. It was educational and fun.

"It was our pleasure to be a part of the contest. It makes me happy to see so many students that are devoted to mathematics as a study, and that one of my own was willing to participate in such a challenging and fun competition. Thank you and the AMS for the opportunity to compete."

Who Wants to Be a Mathematician played to a "standing room only" crowd at the Joint Mathematics Meetings in San Diego. Part of the crowd were crews from two San Diego television stations which covered the game and ran stories that night on their newscasts.

A new format debuted in San Diego in which the winners of the two games played against each other in a "Square-Off Round," with the first of the two winners to answer the square-off question correctly earning a trip to the bonus round and a chance at $2000.

The eight contestants are pictured below with Who Wants to Be a Mathematician host Mike Breen.

The contestants were cheered on by one of the best crowds in Who Wants to Be a Mathematician history. Students held up signs, did cheers, wore costumes, and even used thundersticks to encourage their classmates on stage.

In this round, Kate and Ben squared off on one question. The first to answer the question correctly would win the round and advance to the Bonus Round. The winner of this round would also win $1000, while the other contestant would get $500.

It was Ben who got the question correct first. He then had a chance at the Two Grand Prize Question. It wasn't an easy question, naturally, and Ben used almost every second of his allotted three minutes to answer. 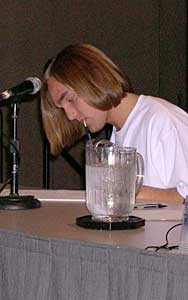 After time was up, while he was explaining his answer to the audience, Ben realized that he had eliminated the correct answer early in his thinking and so the $2000 bonus prize was not awarded - perhaps the only disappointment in a very exciting morning. 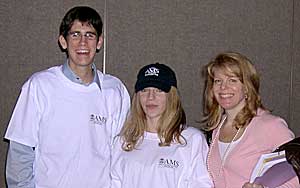 Coronado contestants Daniel and Kate with their teacher, Sandy Fish

The AMS thanks sponsors Texas Instruments, Maplesoft, and John Wiley and Sons for their continued generous support of Who Wants to Be a Mathematician; and the teachers who participated in this marvelous morning of mathematics and who brought a great bunch of students.

CODA: On the following Thursday, January 10, San Diego Fox Channel 6 (XETV) asked Ben and Hansen to appear on its morning show San Diego Living. The two contestants played a shorter version of the game with the show's co-hosts Chrissy Russo and Joe Bauer. Mike asked the four players five math questions, which were a little easier than the usual game questions. Chrissy and Joe did fairly well, with Chrissy edging out Joe by figuring out the number of zeros in a googol squared, but Ben and Hansen were the winners, getting every question right, without even having to resort to their newly won TI graphing calculator and Maple 11 software. A video of the segment is online (Ben and Hansen didn't get to say much, though.) 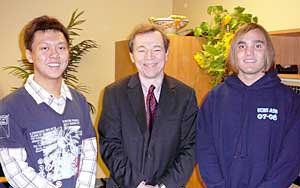 Photographs by Who Wants to Be a Mathematician judge and co-creator Bill Butterworth (DePaul University Department of Mathematical Sciences).