Who Wants to Be a Mathematician at Sam Houston State University 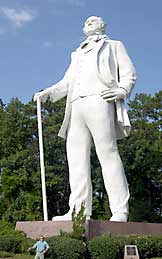 William Li and David Neville each won $1500 playing Who Wants to Be a Mathematician at Sam Houston State University in Huntsville, Texas on October 13. William and David won two of the three games played at the university that day; the other winner was Tara Brantley. All three winners (pictured below with game emcee Mike Breen) qualified to play in the Who Wants to Be a Mathematician championship game at the Joint Mathematics Meetings in San Antonio in January. 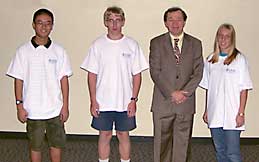 The morning began with a talk by Sam Houston State University senior and math major Eunice Gray, entitled I Have a Math Degree, Now What?. Eunice told the audience about the many careers in education, industry and govertment which are available to math majors and which math majors are in demand for. 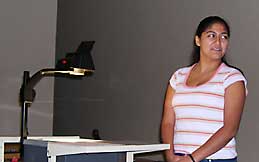 After the talk 12 contestants played three games of Who Wants to Be a Mathematician. Those contestants and the prizes each won are:

Game winners answered a bonus question worth $1500, which both William and David answered correctly. In their explanations, they gave the audience an example of how different areas of mathematics can be used to solve the same problem: William's solution was algebraic, while David used trigonometry and geometry to solve the problem. Both winners answered all questions correctly that day.

The AMS congratulates the contestants on qualifying for the games and thanks their teachers for participating. The AMS would also like to thank game sponsors Maplesoft, Texas Instruments, and John Wiley and Sons for their support of the game, as well as Jackie Jensen of the Sam Houston State University Department of Mathematics and Statistics for handling all of the local arrangements.